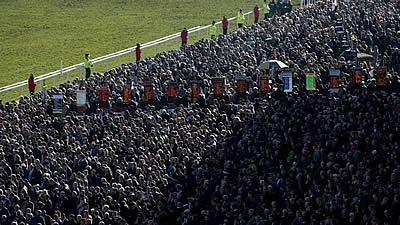 The BHA have made a number of small tweaks ahead of the 2019 Cheltenham Festival with horses now being limited to just one appearance at Prestbury Park. It is a decision which has not been unanimously welcomed by trainers, but it does appear to be a sensible move from the authorities. It is rare to see a competitor doubling up during the four-day festival; however, this new governance is designed to provide greater clarity for horse-racing punters.

Announced at the beginning of February, the new ruling is one of a number of alterations which have been introduced ahead of the 2019 Cheltenham Festival. A small reshuffle in the race order will see the Martin Pipe Conditional Jockey’s Handicap bring the curtain down on another four days of high-octane action in Gloucestershire, with the Grand Annual now taking place on the Thursday. The National Hunt Chase and the Close Brothers Novice’s Handicap Chase will also swap places on Tuesday’s card. The second-last fence on the old course will also be moved in order to give competitors a greater run-up to the obstacle.

However, it is the declaration change which has caused the biggest stir amongst the training fraternity and this new rule appears to have thoroughly divided opinion. Many handlers believed that Cheltenham did not need to act and that they should be solely responsible for their horses’ welfare. Trainers will now be prohibited from entering their horse into multiple events, with many of the top yards having the tendency to declare their stable stars for two or three different races. This had allowed them to make a decision on the day itself; however, it also resulted in several non-runners throughout the festival.

Many National Hunt stars are hardy competitors and the possibility of a quick turnaround is perfectly plausible, but the new ruling will no longer allow this to happen. In 2004, Our Armageddon pulled up in the Arkle, but made his re-appearance just days later in the Cathcart Chase and easily saw off the threat of Iris Rose to land the spoils for trainer Richard Guest.

Several horses were declared for multiple races in 2018, with Richard Hobson’s Shantou Flyer running in the Ultima Handicap on the opening day before subsequently entering the reckoning for Friday’s Gold Cup. The nine-year old was eventually aimed at the Randox Health Grand National instead, but connections believed that he would have more than held his own in the hugely competitive final-day contest. Hobson’s charge is in the betting for this year’s Foxhunters Chase and is currently priced at 14/1. This race will be held on the new course and is one of many contests which will be comprehensively analysed by betting.betfair’s Cheltenham tips ahead of this year’s extravaganza, which gets underway on March 12th.

With savvy punters finalising their ante-post bets months in advance, this new rule should help avoid confusion and the markets are likely to look far less congested as a result. Trainers may be disgruntled by these latest alterations, but it does appear to be a step in the right direction will undoubtedly make things much simpler for punters.

The 2019 Cheltenham Festival is set to be another fantastic spectacle and the four-day exhibition will once again showcase the classiest hurdlers and the most powerful chasers. The new rule change may have divided trainers, but it definitely won’t detract from yet another sensational showdown in Gloucestershire.