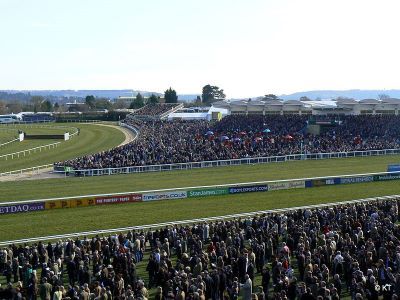 Cheltenham racecourse in 2010. Carine06 from UK.

The Cheltenham Festival Jump Horse Racing Festival is from Tuesday 16 to Friday 19 March 2021, including Gold Cup Day. Cheltenham follows British government’s guidance to allow spectators when it is safe to attend. Until then, when you want a winner, we have the guide and schedule for your favourite horses.

Will there be people in attendance like there was last year when they just missed the Covid-19 quarantines? Prime Minister Boris Johnson has said that restrictions would be lifted, if possible, in mid-February which could allow for crowds at Cheltenham.

Last year’s Cheltenham was one of the final major sporting events to go ahead as normal before the UK was sent into its first national lockdown due to the coronavirus pandemic. The 2021 Cheltenham meet is scheduled to get under way on Tuesday, March 16 with The Champion Hurdle being the headline race on Day One.

The Queen Mother Champion Chase and The Stayers’ Hurdle will follow on the next two days, ending with the Gold Cup on Friday, March 19.

The way they run the Cheltenham Festival is by splitting it in two sections, running four days in total. Days one and two will be run on the Old Course, days three and four on the New Course.

The Old Course was used for the Champion Hurdle and Queen Mother Champion Chase. The New Course, which hosts the longer Stayers’ Hurdle and Cheltenham Gold Cup, takes a toll on a horse’s stamina. The field can drastically change and morph as the horses gallop up the fabled Cheltenham hill.

The first race is the Supreme Novices’ Hurdle which starts the Cheltenham Festival and sees runners sent off with the famous “Cheltenham roar”. The Supreme has an impressive roll of honor, including the likes of Vautour and Douvan, but one of the most notable winners in recent years was Altior.

The Arkle Challenge is the second race and is offered for top two-mile horses. The Arkle has been won in the past by Moscow Flyer, Azertyuiop, Sizing Europe, and Sprinter Sacre, to qualify to run r the Champion Chase. Willie Mullins has dominated the race in recent years, including victories for Un de Sceaux, Douvan, Footpad, and Duc des Genievres.

The third race is the Festival Handicap Chase which has seen one of the best rides in Cheltenham Festival history when Wichita Lineman was carried home by A. P. McCoy in 2009.

The National Hunt Chase is one of three races at the Cheltenham Festival restricted to amateur riders. It is the longest race of the meeting, run over three and three-quarter miles where Irish trainers have had plenty of success in recent times. Gordon Elliott has won two of the last three runnings, including with Ravenhill in 2020.

Then they have the Novices’ Handicap Chase first run in 2005. It often brings the most progressive novices together, and has a history of representing strong form.

The Cheltenham Festival is one of the “meetings” (British term for horse races, etc.) in the National Hunt racing calendar in the United Kingdom. Its race prize money is second only to the Grand National. It takes place annually in March at Cheltenham Racecourse in Cheltenham, Gloucestershire. It usually coincides with Saint Patrick’s Day and is particularly popular with Irish visitors.

The meeting’s Grade I races include: the Cheltenham Gold Cup, Champion Hurdle, Queen Mother Champion Chase, and Stayers’ Hurdle. Large amounts of money are gambled, hundreds of millions over the course of the week.

Cheltenham is known for its atmosphere, including the “Cheltenham roar”, referring to the enormous amount of noise that the crowd generates as the starter raises the tape for the first race of the festival. It was initially titled the Grand National Hunt Meeting and took place at several locations.

After additions and major improvements made at Cheltenham, including a new stand (the fourth one), miles of drain to prevent unsuitable racing ground, tar paving in the enclosures, and the paddock extended to 35 saddling boxes, proved enough to make the National Hunt Committee decide that the 1911 meeting was to return at Prestbury Park, Cheltenham where it remained to the present.