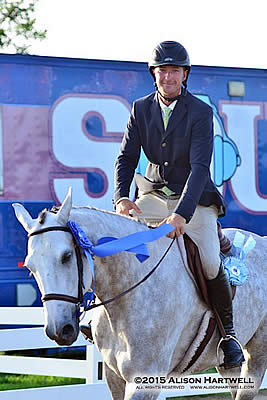 The Charleston Summer Classic wrapped up last weekend to rave reviews from horsemen from around the country who couldn’t say enough good things about their “showcation” on Johns Island, South Carolina.

Besides offering the largest prize money of any horse show in South Carolina, the Charleston Summer Classic provided the perfect backdrop for family and friends looking to enjoy the entire experience and make memories to last a lifetime.

The show offered many riders the opportunity for a series of “firsts”. Week I saw Tim Maddrix pilot Alina Dumitrescu’s Shutterbug to a first win in the $2,500 USHJA National Hunter Derby.

Spectators got to see Gemma Paternoster pilot her own Zonneglans [aka Dolly] to win her first Grand Prix Week II in the $35,000 Devoucoux Grand Prix. Dolly did a double that week, as the pair also won the $5,000 Open Welcome, presented by Finish Line Horse Products.

Fun in the sun and after hours is part of the Charleston Summer Classic’s “showcation” feel. Friends charter boats for fishing excursions, lie on the beach, windsurf and kayak. The Classic Company pulls out all the stops for its flagship show and welcomes all with parties at Red’s Ice House, the Annual BBQ at Classic Company’s Tissy Principe’s beautiful home, Bloody Mary Brunches in the VIP on Saturdays and the list goes on.

The Great Magnolia Show Jumping Tour Champions, presented by Practical Horseman, were awarded on Saturday as well as the Division Champions. Congratulations to the Champions!

Grand Champion Amateur Hunter Champion and recipient of the Seabrook Perpetual Trophy:
All the Best, owned and ridden by Christina Fisher

Grand Children’s Hunter Champion and recipient of the Trick or Treat Memorial Trophy:
Cure the Blue, owned and ridden by Alyssa Talpos

Grand Green Working Hunter Champion and recipient of the Sit Down Perpetual Trophy:
Special, owned by Missy Nolan and ridden by Tim Maddrix

Adult Amateur 51 and over Champion:
Inked, owned and ridden by Holly Simms

Amateur Owner Hunter 3’6″ Champion:
All the Best, owed and ridden by Christina Fisher

Children’s Hunter 14 and Under Champion:
Equanimity, owned by Black Ankle, LLC and ridden by Laura Neely

“We would like to thank all of the competitors, sponsors and their families for attending the Charleston Summer Classic. Next year marks our 25th anniversary and we are planning THE show of the summer!” said Bob Bell, President of Classic Company. “We are already making outstanding plans to ensure its success and invite all to enjoy what the Charleston Summer Classic offers: the biggest prize money in South Carolina, the best exhibitor parties and cocktail receptions and of course, the beach!” The dates for the show are July 12-16 and July 19-23. “We’re running our show from Tuesday to Saturday in order to meet the condo rental schedule here on the island,” commented Bell, “and that way folks can still get to Blowing Rock for those who are going,” he added.

“Since our show is in the middle of the high season on the island, reserve your condo early!” Bell advised. “The prize list will be available online by February 1st and we hope you will join us to celebrate our 25 years!” he added.