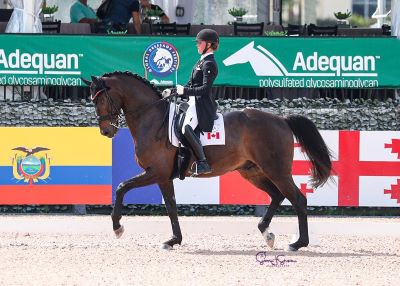 Wellington, FL – March 17, 2022 – The FEI Nations Cup for Under 25 riders, presented by Diamante Farms, was the feature competition on Thursday, March 17, during week 10 of the 2022 Adequan® Global Dressage Festival (AGDF). The under-25 division was a tussle between archrivals Canada and the U.S., with team Canada coming out on top, scoring 133.323 points to take gold. The U.S. claimed silver with 129.5 points.

Camille Carier Bergeron rode Sound of Silence 4 in only the pair’s second under-25 CDI to the top spot for the winning nation, placing second overall in the CDIOU25 Intermediate II, presented by Diamante Farms. Individually, Benjamin Ebeling (USA) topped the class with 70.529% on Ann Romney’s Status Royal OLD. However, Ebeling was not on the under-25 U.S. team as he is riding Vantage Equestrian’s Indeed on the senior team. The 22-year-old Vanessa Creech-Terauds bolstered the Canadian result, clinching gold by finishing fourth with 65.764% on Fleur De Lis L, Louise Leatherdale’s home-bred 13-year-old daughter of First Dance.

Creech-Terauds, who was also on last year’s winning under-25 Canadian team with Carier Bergeron, said: “It’s very exciting to have won the second year in a row with Camille. It’s always been so much fun. I’ve been competing against and with Camille for a long time, and it’s so nice that in the U25 we’re able to be on the same team, because in juniors and young riders we always had to compete against each other. It’s always a really great experience going in that ring and representing Canada and getting more experience for both of our futures, and I know we both have goals to represent Canada more often, so every time it really makes me proud.”

At the half-way point of the two days of team competition in the Stillpoint Farm FEI Nations Cup CDIO3*, team Germany leads the way. The format at this show allows teams to combine small tour and grand prix combinations, with the latter garnering a 1.5% bonus for the more difficult test.

Thursday’s action included Prix St. Georges and Grand Prix, with small tour riders progressing to the Intermediate I test on Friday, and the big tour riders tackling the Grand Prix Special, after which the team medals will be awarded.

Germany’s top three scores were over 72%. The team’s two big tour combinations filled the top two spots individually in the Grand Prix CDIO3*, sponsored by Stillpoint Farm. Michael Klimke pulled off a new personal best with Harmony’s Sanrino RHP of 71.152% (72.652% including the bonus) and Christoph Koschel on Dünensee slotted into second with 71.022% (72.522% including the bonus). Katie Duerrhammer claimed third with 70.152% (71.652% including the bonus) riding Quartett, keeping the U.S. team in striking distance of the gold.