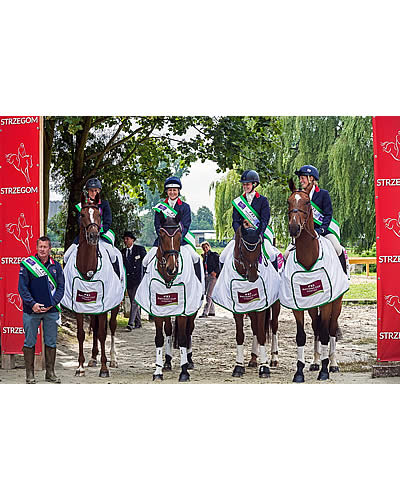 The three-man Australian team led after Dressage, with Andrew Hoy taking the individual lead on Cheeky Calimbo, but the Brits, who were third at that stage, were collectively faster across country to take a tiny two-penalty lead going into the final Jumping phase.

When Hoy hit the last fence, Izzy Taylor (GBR) had two fences in hand for Britain to win a second FEI Nations Cup™ Eventing leg this season, following victory at Ballindenisk (IRL) in April, and extend their advantage at the top of the leaderboard.

Taylor has been one of the most stalwart members of Britain’s FEI Nations Cup™ Eventing squad since the series began in 2012 and she did not let her team down, producing a perfect clear on KBIS Starburst to finish in second place, the only rider to complete on her Dressage score.

Australia’s third rider, Christopher Burton (Haruzac), hit two fences to lose his overnight lead after Cross Country and drop to fifth, but his team was assured second place as none of the other five nations had three riders left in the competition.

Strzegom, which will host the 2017 FEI European Eventing Championships, continues to grow in stature and seven teams, the most so far this season, made the long journey into the beautiful Polish countryside. Riders were full of praise for the new facilities, including an all-weather arena.

Germany fielded a team of young riders who lay second after Dressage, but dropped to fourth with the disappearance of Franca Lüdeke (Parlando), who had a rider fall at fence 20, a pair of angled brush corners, and Julia Weiser (Quitana), who had cumulative refusals.

Sweden, Netherlands and Poland, the host country, also lost two riders each on the Cross Country and Tim Lips, who finished best of the Dutch team, had a run-out at fence 20 on Concrex Vakarlos.

“It was good practice for the pressure stakes,” said Britain’s team manager for the FEI Nations Cup™ Eventing, Philip Surl. “The Cross Country was stiffer than usual and so to have four such good performances and then three clear rounds next day was very satisfactory and will certainly make the long journey home a lot easier. The riders were all very professional. This is quite a pivotal weekend for us, as we have 12 places at Blair Castle [the Longines FEI European Eventing Championships in September] as host nation, and will be announcing the longlist of riders soon.”

The FEI Nations Cup™ Eventing 2015 moves next to Aachen (GER) in August, which attracts a huge audience and is always highly competitive.