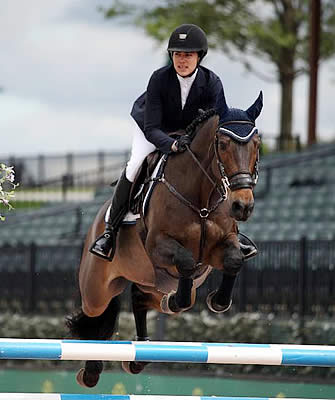 Mill Spring, NC – May 5, 2017 – Brianne Goutal (USA) and Onira made quick work of the $6,000 Horseware® Ireland 1.45m CSI 2* at Tryon International Equestrian Center (TIEC), as the duo took the class with a jump-off time of 34.64 seconds. Sharn Wordley (NZL) and Famoso D Ive Z captured second place with a time of 35.26 seconds, while Darragh Kerins (IRL) and Silteplait de Circee finished in third after stopping the timers in 38.043 seconds.

Goutal and Onira are a veteran combination and have traveled the national and international show jumping circuits for nearly fourteen years together. The 1996 Dutch Warmblood gelding (Nimmerdor x G.Ramiro Z), owned by Remarkable Farms LP, has kept his youthfulness and competitive edge with Goutal piloting from the irons.

“He’s 21 now. The goals for us are just to give him some nice classes to finish out his career. I had a baby in January and he’s been a huge piece of my comeback tour,” said Goutal, affectionately describing her longstanding partnership with Onira. “We were really looking forward to this show. He feels amazing.”

Goutal and Onira competed together at TIEC throughout the 2016 season and she feels that the venue and atmosphere bring out the best in him. She explained, “He loves this horse show. He can get a little bored by the end of Florida. He got off the truck here and we could barely get him to the jog. He was so fresh, rearing and bucking, just excited to be here.”

The duo has maintained a shared desire to win and Onira looked both fit and fresh. She acknowledged the pair’s lengthy career together, noting that the care and respect she and her team have for Onira has helped to keep him happy and wanting to work, even at his older age.

“We’ve never pushed him. He’s had injuries and I think we always made sure to pay attention to the details. If they told us three months, we gave him six. If they said six months, we gave him a year,” she explained. “I don’t show him a lot, but try to keep him jumping consistently, even if it’s just cavalettis. I think that has been the best way to keep him mentally and physically motivated.”

The win was an emotional one for Goutal and she described her unique and deep relationship with Onira, which has spanned more than a decade.

“He’s always just been one step ahead of everyone else. He knows where he’s going and he knows when it’s his time. He trots into these big classes completely different. He just knows,” she said. “He has always known when to step up to the plate. He’s just different and always has been. He’s the horse of a lifetime.”