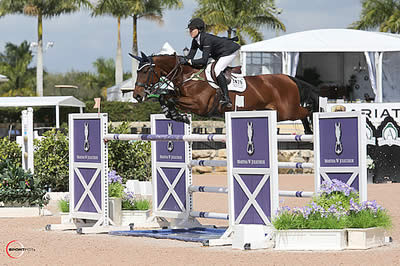 Ariat® International, Inc. is the title sponsor of week five CSI 3* competition on February 4-8, 2015. The week will feature the $127,000 Ariat® Grand Prix CSI 3* on the grass jumping field at The Stadium at PBIEC on Sunday, February 8. The weekend also highlights the 6th Annual Great Charity Challenge presented by Fidelity Investments®, which will be the main event on Saturday, February 7, under the lights of the International Arena at PBIEC. Both events will be live streamed at www.COTH.com. The Great Charity Challenge will begin at 6:30 p.m. on Saturday. Watch it LIVE at: http://bit.ly/1DfE5ZK. The $127,000 Ariat® Grand Prix CSI 3* starts at 2 p.m. on Sunday. Watch it LIVE at: http://bit.ly/1KvCJu5.

Robert Ellis of Great Britain set the speed track for Friday’s Ruby et Violette WEF Challenge Cup Round 5 with 77 rounds and 17 clear combinations. With her win aboard Remarkable Farms LP’s Ballade van het Indihof, Brianne Goutal broke Eric Lamaze’s four-week hold on the series. The defending winner had one rail down to finish out of the money.

Although other riders were faster, Goutal’s early clear round, fifth in the order of go, would prove unbeatable. Lamaze went right before her, fourth in the order, and it was no mistake that Goutal crossed the timers just fractions off of his time. She watched his every step before entering the ring, and followed the same track. Her resulting time of 59.90 seconds held on through over 70 rounds for the win. Sweden’s Alexander Zetterman and Flecu finished second, almost three seconds slower in 62.54 seconds.

“It helped a lot to have Eric before me,” Goutal admitted after the class. “He always has the best jump-off tracks or speed tracks. He wastes no time. You see which numbers he does. From jumps two to three he did six strides and everyone else did seven, including myself. I walked that line and I did not walk six, and I am still not so sure how he did it. He is amazing to watch because he is always cutting corners, but just in the right way that he is not compromising the fence, so it is great to have him in front of you.”

Goutal’s winning mount, Ballade vent het Indihof, is a 14-year-old Belgian Warmblood mare (Thunder van de Zuuthoeve x Heartbreaker) that the rider has owned for several years, but had a long break from showing. She finished third in the $125,000 Trump Invitational Grand Prix, presented by Rolex, to kick off the season in January and has maintained her top form.

“That horse is absolutely incredible. I just got her back. She was off for almost two years with injuries,” Goutal explained. “She is the most careful horse I have ever ridden, and I think I have ever seen. She is electric and allergic to wood. What’s wonderful is that she is super brave as well, which is a great combination. She is really, really fast. To be honest, I didn’t think I was going to win. I didn’t feel like I was going very fast. I felt I was neat. I was hoping for top ten, and I think I just got really lucky that she’s so fast naturally. She does everything so efficiently, never wasting any time. I went around to the last jump even.”

Goutal praised course designer Bob Ellis on a great track that saw rails in many different places for some of the top horses and riders on Friday.

“I thought it was a beautifully designed course. At this level, these course designers are so good. They just know where to put the jumps and how to trick you and how to test you. I was super impressed with the track today because I thought it was a big speed track that had options and a lot of tests, but it wasn’t overdone or underdone at all. A lot of different jumps came down, which is, in my opinion, the mark of a great course. You have to pay attention to every jump and be super aware from beginning to end,” Goutal stated. “He always builds different courses. I think he does all the right tests. We see a few course designers that are consistent like him, and there is a reason they are building in this ring. I am super grateful to be jumping these kind of courses all the time.”

Goutal will jump Ballade van het Indihof again in Sunday’s $127,000 Ariat® Grand Prix CSI 3* on the grass field at The Stadium at PBIEC. After a great finish on the grass at the Trump Invitational, she feels her horse is ready to take on the new venue.

“She jumps really well on grass. She is a really confident horse and she is just fun to ride, so I am looking forward to it,” Goutal stated. “I love to go over there. I think it is a great change of venue and pace, and we are super lucky to have that as an option.”

Also competing on Friday, the $6,000 Spy Coast Farm 1.40m Speed Challenge was held with two sections of competition. Adam Prudent and Patrick Flin and Plain Bay Sales’ Vasco won Section A in the International Arena. Laura Chapot and The Edge’s Out of Ireland won Section B in the Mogavero Ring.

Despite a rainy day on Thursday, Lynn Rogers, from Long Island, NY, and her own horse, Blue Point, were in winning form. Rogers and Blue Point stayed consistent throughout the day and finished first, second, and third over fences. With only one day of competition, Rogers ended up as the champion of the Camping World Adult Amateur Hunter 50 and Over Section A.

Deborah Perkins and her own horse, Kaepernick, topped two of the over fences classes to finish as reserve champions of the Camping World Adult Amateur Hunter 50 and Over Section A.

With the rain yesterday, Blue Point and Rogers prepared for today’s classes with a trail ride. Rogers commented, “He [Blue Point] didn’t even lunge today. He’s easy to prep and very quiet.”

Rogers bought Blue Point when he was four years old and has been competing with him for the past three years. “I was looking for a three-foot hunter and my trainer, Tommy Serio, had Blue Point in the barn. Tommy said he [Blue Point] was too young for me, but I wanted a horse just like him. After a week Tommy let me ride Blue Point, and we just hit it off!” Rogers explained.

When Blue Point is not competing in the show ring, he enjoys going trail riding. “He is the best trail horse I’ve ever had!” Rogers smiled.

Now competing at WEF for over 10 years, Rogers is still enjoying her winter months in Florida. “I like the footing, the nice jumps, and of course the weather. The reason I still show is because I like jumping these courses,” Rogers said.

Competition continues in the International Arena on Saturday with the $34,000 Suncast® 1.50m Championship Jumper Classic during the day session and the 6th Annual Great Charity Challenge, presented by Fidelity Investments®, in the evening. Hunter action continues with the Shamrock Ventures Amateur-Owner Hunter 3’3″ 18-35 in the E. R. Mische Grand Hunter Ring. For full results and more information, please visit www.pbiec.com.