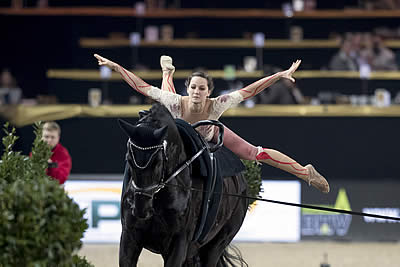 Boe got her World Cup campaign off to the perfect start, taking the female title, whilst her training partner and team mate Jannik Heiland won in the male category.  Lorenzo Lupacchini and Silvia Stopazzini continued their Pas de Deux dominance to take their second victory of the season with a personal best score.

Spectators in Mechelen were gifted a belated Christmas treat of watching highly competitive classes that exceeded expectations as the series edges closer to the final in Dortmund (GER) in March.

The male category got the action underway in with a class full of previous medal winners.  Following a dominant first round performance, Jannik Heiland (GER) managed to hold his nerve and fend off the competition to take the title on a score of 8,528.

Together with Dark Beluga and Barbara Rosiny, he continued to show a commanding performance of his Jungle Book routine that features a range of difficult and unique bounces and captivates the audience with his interpretation of the famous story.

Jannis Drewell and his well-established team of mother Simone Drewell on the lunge and the 18-year-old horse Diabolus 3 managed to improve on their first round freestyle to score an impressive 8,629 in the second round to finish in second on 8,385.  Drewell equalled his Salzburg performance and pushed Clement Taillez (8,309) into third. Together with Dyronn and Cedric Cotton, Taillez was unable to match the finesse of his performance in Paris where he took the maximum FEI points available.

Last year’s runner-up Kristina Boe (GER) got her FEI World Cup™ Vaulting campaign off to a resounding start with her impressive Zombie routine that has captivated audiences throughout the season and secured her the silver medal at this year’s FEI World Championships.

Boe, renowned for her artistry with even the most difficult moves contributing to the story, lived up to expectations.  Teaming up with a new combination of Dark Beluga and Barbara Rosiny – who had already won alongside Jannik Heiland – she scored 8,598 showing exactly why she is the current World number 1.

Silvia Stopazzini (ITA) maintained pressure on Boe throughout the competition and continued to impress with her incredible strength and control. Finishing on 8,414 and with two second places under her belt she is definitely a title contender.

Corinna Knauf (GER) teamed up with her sister Alexandra Knauf and Fabiola to improve on her performance in Salzburg taking third on 8,179.

Unfortunately Janika Derks’ horse Carousso Hit was unsettled in the second round. Janika managed to keep her composure, although the performance was more reserved than usual and she dropped from fourth place in the first round to finish in sixth (7,842) in the final analysis.

Italy’s Lorenzo Lupacchini and Silvia Stopazzini continue to show their meteoric progression, taking their second win of the series and improving on the score they produced in Salzburg by an incredible 0.6.

Together with Laura Carnabucci on the lunge, they received 8,768 which is their highest Pas de Deux score to date, as they grow in confidence alongside 9-year-old gelding Rosenstolz 99 who continues to achieve scores above 8.

“In Mechelen it is a really nice atmosphere; it is always a challenge to compete Individual and Pas De Deux in the same competition as there is not a lot of time to prepare,” said Lupacchini. “However, we are really happy with our performance and we finished on an 8.7 which is our new best score!”

Timo Gerdes and Jolina Ossenberg-Engels (GER) performed a new routine that didn’t quite come together as a coherent piece.  However, it included a range of highlights that show great improvement and innovation.  Unfortunately their horse, Dragoner, stopped before the routine was finished, resulting in their Pas de Deux coming to an abrupt end and impacting on their score so they finished in second on 7,063.