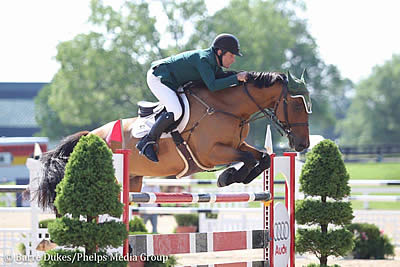 Lexington, Ky. – May 20, 2018 – The final day of the Kentucky Spring Classic concluded jumper competition in the Rolex Stadium with the $35,000 Bluegrass Grand Prix, sponsored by Audi of Lexington, to close out the spring horse show series. Course designer Guilherme Jorge (BRA) tested 31 athletes across his 16-efforts track, but Ireland’s Kevin Babington (IRL) was the only double-clear pathfinder with Mark Q to claim his second consecutive National Grand Prix victory of the series.

The technical track only saw four clear rounds consisting of just three different riders as Babington directed two mounts to the jump-off. Babington first entered the second round aboard his own Double O Seven 7, but with one rail the pair ended on four faults in a time of 43.260 seconds, to be overtaken and they finished in fourth place.

Next in the ring, Alex Granato (USA) and Moyer Farm LLC’s 11-year-old Dutch Warmblood gelding, Beorn, followed to better their time in 41.221 seconds, but with one rail down they still left room for improvement. The duo once again claimed the third place prize, repeating their finish in last week’s $35,000 Commonwealth Grand Prix.

Todd Minikus (USA) returned next aboard Amex Z, the 9-year-old Zangersheide mare owned by the Bit By Bit Group, to fly to the speediest time of 39.168 seconds, but also misplaced one unfortunate rail and the 4 fault total placed the pair into the second position.

The last to enter the jump-off round, Babington knew all he needed was a clear, conservative round aboard Mark Q and the duo delivered as the only horse-and-rider combination to produce the long-awaited double-clear effort in a time of 47.272 seconds. He and the 16-year-old Irish Sport Horse gelding claimed the win to repeat Babington’s victory in last week’s $35,000 Commonwealth Grand Prix with Super Chilled.

Earlier in the day, the $20,000 Under 25 Grand Prix saw 18 horse-and-rider combinations tackle the 16 effort track created by Guilherme Jorge (BRA). Six athletes jumped clear rounds to qualify for a competitive jump-off that saw each athlete pushing the time limit. Abigail McArdle and Plain Bay Sales LLC’s Fanta Light B were the fastest pair in the jump-off to stop the timers at 35.025 seconds.

The 8-year-old mare recently moved up the ranks during the Florida winter season with McArdle. The pair secured big wins at the Palm Beach Masters and a CSI2* at the Winter Equestrian Festival class. McArdle plans to continue to bring the young mare up the Grand Prix level ranks.

Lacey Gilbertson and her superstar mare, Baloppi, come in close for second at 35.037 seconds. Gabriela Reutter and Juan Reutter’s Atticus Diamant jumped to third with a time of 34.707 seconds.

The final day of the Kentucky Spring Classic saw hunter competitors vying for the top prize in the $5,000 USHJA National Hunter Derby, sponsored by the World Equestrian Center and Kentucky Horse Shows. Twenty-five horse-and-rider combinations entered the Stonelea Ring with hopes of capturing the top prize, but no one could catch Jordan Allen and Eclypse, who claimed first place with a total score of 184.

The first round of competition asked athletes to demonstrate their skills over a lengthy course which involved bending lines and multiple combinations. After all 25 horse-and-rider teams completed their course, the top 12 athletes who scored an 80.5 or higher were asked to return for a second handy round. During the handy round riders demonstrated their horses’ handiness by executing tight turns and a trot fence was also added to the course.

Allen and Eclypse dominated both rounds of derby competition by scoring a 92 during round one and again during round two. Their scores could not be caught by any other competitor, which included veteran riders such as Jeff Gogul and David Beisel. Allen utilized all available opportunities for points, including all four high option fences during round one and round two. Allen and Eclypse, a 10-year-old Hanoverian mare owned by Holly Orlando, teamed up during Week 11 of the Winter Equestrian Festival (WEF) in Wellington, Florida where they placed consistently in the Junior Hunters.

Second place was earned by Samantha Cooper and Nandino, a 10-year-old Brandenberg Warmblood owned by Ellen Malson. The pair put in a first round score of 89 and a second handy round score of 93 for a combined total of 182.

Last week’s National Derby winner at the Kentucky Spring Horse Show, Jeff Gogul and Quite Ruffy, captured third place with an 86 in round one and a 91 in round two for a 177-point total.