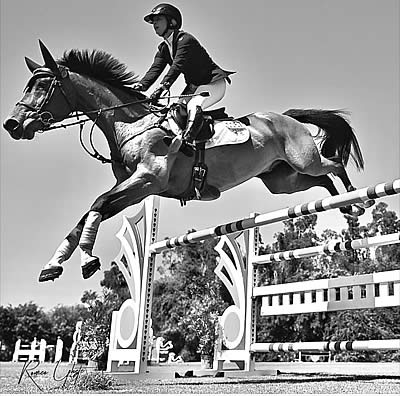 Ashlee Bond and Ace of Hearts (Photo by Romeo Ghete)

Wellington, FL (March 3, 2020) – The final week of February brought cool weather and great competition on the grass to Black Watch Farm. The Ridge at Wellington’s Turf Tour Week 8 saw debutant attendees and show regulars in the winner’s circle, while attendees enjoyed complimentary mini Moët & Chandons, hospitality, and superb turf footing for all levels of show jumping. Turf Tour Week 9 continues at To-Kalon Farm March 4-6, with a complimentary, open to the public wine tasting courtesy of To-Kalon’s owner Jeremy Nickel, magnums of wine for select class winners, and all the atmosphere and competition the Turf Tour is known for.

A field of 26 riders faced off on Friday for the $15,000 1.40m Turf Tour Grand Prix over a course designed by Mexico’s Oscar Soberon. Israel’s Ashlee Bond logged her first Turf Tour Grand Prix victory aboard Ace of Hearts with a jump off time of 32.315. Jordan Coyle and Stella Manship’s Chuckles finished second on 33.983, with Sloan Coles and Coldplay in third with a time of 35.510. The competition included some of the world’s top ranked riders, including Daniel Bluman and Lauren Hough. Bond, who also finished fifth aboard Donatello, rode for the first time at the 2020 Turf Tour during week 7 and stated that the show’s unique venues and training atmosphere was a huge boon for riders: “I love how you can go show at a different location weekly [on the Turf Tour] and go into different arenas in a beautiful and relaxed environment,” said Bond. “I think it’s really important to have shows like this as it is super beneficial for horses and riders to get in the ring without pressure. It’s also good for their minds. Training in a show environment is not something you get to do often enough like in Europe and I think it’s so important.”

An inclement weather forecast on Wednesday prompted a schedule change to hold February 26th’s classes on the 27th. Thursday’s chilly temperatures and abundant sunshine set the stage for Stella Manship to claim another win on the Turf Tour. The winner of week 7’s Turf Tour Grand Prix aboard Quarto Mail, Manship once again galloped to victory with the bay gelding at Black Watch’s $5,000 1.30m Rising Star Classic. Riding against a competitive field, Manship and Quarto Mail turned on the nitrous in the jump-off to finish on a time of 34.703. Her colleague Jordan Coyle rode Warnike to second in 35.681, and the speedy Kyla Makhloghi and Hurry Up B took third with 37.909.