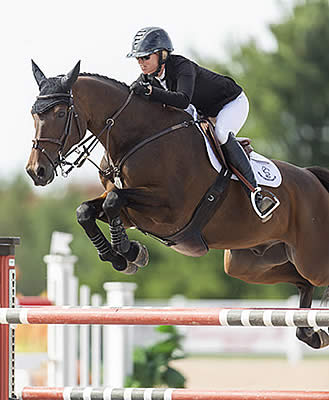 Comprised of three phases held Thursday, Friday evening, and Sunday, Millar’s consistency with Truman put her at the top of the overall standings to win her first Caledon Cup.  She was also awarded the inaugural $10,000 Caledon Cup rider bonus, presented by RAM Equestrian, to make victory even sweeter.

“I chose the right year to win it!” smiled Millar, 42, who also won a $1,000 bonus for wearing a HEP-branded saddle pad on her way to victory.  “It’s hard to be consistent over the three days.  Truman was good the first day and got a ribbon on the second day.  I had some making up to do and came into today needing to win.  All you can do is the best you can and I also got lucky.  It’s so great to have all of the hard work rewarded with a bonus like that.”

On Sunday, Millar and Truman were one of six pairs to successfully negotiate the first round track set by Mexican course designer Catsy Cruz and had the advantage of being last to return for the tie-breaking jump-off.

“Going last proved to be more good luck for me,” said Millar.  “Being where I was in the jump-off order, I could see exactly what I had to do.  It was nice to know exactly what it was going to take.”

When Millar entered the ring for the jump-off, 2008 Olympic team silver medalist Jill Henselwood of Oxford Mills, ON held the lead with a time of 42.13 seconds.  Millar and Truman executed a clear round in a time of 40.72 seconds to take the win over Henselwood riding Eblesse, a 10-year-old Dutch Warmblood gelding (Tangelo van de Zuuthoeve x Martel) owned by Juniper Farms.

Hyde Moffatt of Brantford, ON was the only other rider to go double clear, stopping the clock in 43.71 seconds for third place riding Ariel Grange’s Gisborne VDL.  Brady Hayes of Richmond Hill, ON had the time, 38.93 seconds, but a rail down for four faults cost him the victory with Ridley, a Canadian Sport Horse also owned by Grange.

When the points were tabulated for the Caledon Cup following all three phases, Millar was tied on 37 points with Ireland’s Daniel Coyle, who had won Friday night’s featured event with CHS Krooze.  As the top performer in the final phase, Millar got the nod as the 2019 Caledon Cup winner.

“These types of championship formats, whether it’s at the two-star, five-star or Olympic level, put you and your horse in the position of having to perform consistently,” noted Millar of the Caledon Cup’s three-phase format.  “It’s exciting, and every day you come out trying to win.

“I’m really pleased with my string of horses,” continued Millar, who also enjoyed a successful week in Caledon Cup competition riding Ericson, a 10-year-old Dutch Warmblood stallion owned by Millar Brooke Farm Ltd. and Partners.  “Truman has been coming along fantastic; he can jump anything.  My little horse, Ericson, has really stepped up and been very consistent at 1.50m and I’m looking forward to moving him up to 1.60m next year.  You work and work and you wait and you wait and here we finally are.”

Millar discovered Truman while based in Belgium in preparation for the 2016 Rio Olympic Games where she was a member of Canada’s fourth-placed team riding Heros.  She began riding the now 10-year-old Selle Français gelding (Mylord Carthago x Kolibri) at the encouragement of her Olympic teammates, Tiffany Foster and Eric Lamaze, and partnered with Lamaze to buy him.

“Truman is an interesting guy; he is a very level-headed horse,” said Millar of Truman, who is now owned by Patty and Patrick Overlund in partnership with her family’s Millar Brooke Farm Ltd.  “He’s very programmable; you teach him something and he will do it exactly the same every time.  We had to teach him a lot of stuff but once he learned something, he never forgot it and we could move on to the next lesson.  The more I ride him, and the more I get to know him, it allows for a lot of consistency in our performances.”

“I’d like to thank Craig and his team of sponsors for this wonderful week of jumping and all of the extra bonuses and incentives,” said the newly-crowned Caledon Cup champion.