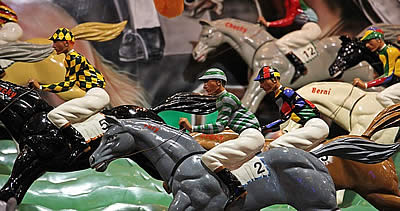 Do you think you know all there is to know about the beloved sport of horse racing? Whether you’re a seasoned pro or just starting to explore the rich history of this prestigious athletic endeavor, chances are that there are more than a few horse racing facts out there that will surprise you. One of the oldest sports in the world, horse racing is notorious for its coded ways and opaque conventions, leaving many outsiders feeling more than a little mystified. Like anything though, it just takes a little time and patience to understand and appreciate. Here are a few incredible facts about this fascinating activity.

Some horses have defied all odds

Generally speaking, horses have to be able to meet some basic criteria before they can race. Anyone familiar with sportsbet horse racing will know that in addition to passing a regular inspection, it is also necessary to confirm that the horse is completely healthy and exhibiting no symptoms of illness. Seems reasonable enough consider no one would bet on a sick horse, right? Well in 1921, one British racehorse, aptly named Humorist, proved that this wasn’t necessarily the case. Upon winning the country’s most prestigious event, The British Derby, it was discovered that the horse had tuberculosis and was thus competing with only one healthy lung to rely on. It sure didn’t stop him from winning though.

Most horses retire at 15 (halfway through their lifespan)

Just like human athletes, racehorses tend to have a “peak,” at which age they tend to perform best and most consistently. This sweet spot often comes around the 10-year mark and it is pretty unusual to see a racehorse competing past the age of 15. Although they live, on average, for around 30 years, it is unprecedented for a horse over the age of 18 to win a professional horse race.

As old as time itself

When we say one of the world’s oldest sports, we mean it! Although the first official records of horse racing date back to the time of ancient Greece, there is reason to believe that some version of this activity can be traced to as far back as 4, 500 BC. Whether or not the legacy stretches back quite that far though, we have confirmation by way of chariot racing depictions on ancient pottery and descriptions from the infamous poet Homer to know that horse racing has been around for a very long time.

Horseracing is a matter of balancing scales

Have you ever stopped to ask yourself how much the average racehorse weighs? Well, in sharp contrast to the famously featherweight jockeys who ride them, you can expect the average Thoroughbred to weigh in at about 1,000 pounds. At the higher end of the weight spectrum though, this can be almost doubled to upwards of 2,000. Switching to the other extreme, the lightest jockey who has ever been recorded weighed an incredibly slight 49 pounds, which is approximately what you could expect of an average 7-year-old.

A LOT of money is bet on horse races

You were probably already aware that there is a lot of money tied up in horses racing, but the actual figures may still make your jaw drop a bit. Over the course of a regular racing season, about $100 billion is bet on horseracing. That’s a pretty staggering number when you think about it. People the world over have long taken great pleasure in better on horse races through, so perhaps it shouldn’t come as too much of a surprise that that number is only likely to continue growing.