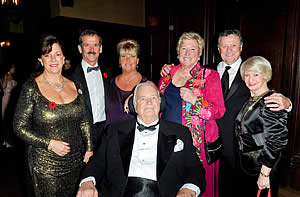 Toronto, Ontario – The final numbers are in, and the inaugural ‘A Royal Canadian Evening’, held November 6 at the historic Casa Loma in the heart of Toronto, proved to be an extremely successful fundraising event, raising more than $20,000 for the Canadian Dressage Athlete Assistance Program (C-DAAP).

Founded by Deborah Kinzinger Miculinic, C-DAAP was developed as a means of assisting Canadian dressage athletes at the junior, young rider and high performance levels with the training, competitive and educational expenses incurred during their quest to represent Canada on the world stage. To date, seven high performances athletes – Jacqueline Brooks, Brittany Fraser, Jaimey Irwin, Megan Lane, Karen Pavivic, Belinda Trussell and Chris Von Martels, have received C-DAAP grants totaling more than $130,000, and now have their sights set on the 2015 Pan American Games to be held on home ground in Toronto, ON. In addition, C-DAAP has contributed over $30,000 to various rider support programs.

‘A Royal Canadian Evening’ brought friends of Canadian dressage together, with all of the net proceeds going to support C-DAAP. Canadian astronaut Commander Chris Hadfield entertained the audience as the keynote speaker at the black-tie affair, auctioning off the Canadian-made Norman guitar he played at the end of the evening. The Countess Bathurst was the Patron of ‘A Royal Canadian Evening’ while Canadian comedian Neil Aitchison acted as Master of Ceremonies. Butternut Ridge was the presenting sponsor, joined by supporting sponsors Omega Alpha and Groundswell.

With a variety of tempting items up for auction, the elegant dark bay filly, Bojidar, donated by Butternut Ridge, attracted the highest bid of the night. A bidding war erupted over a travel package to England that included a one-week stay at The Earl and Countess Bathurst’s estate in the Cotswolds, two nights at the Hampshire Four Seasons Hotel and Equestrian Center, and a $2,000 Air Canada gift voucher to travel in style.

Also proving extremely popular was the opportunity to customize a package with six-time Canadian Olympian, Christilot Boylen. As a memento of the experience, Boylen also gifted her 1971 Pan American Games Gold Medal won in Cali, Colombia, to the winning bidder.

“I am so appreciative of the support from those who purchased tickets and/or auction items, and I am very grateful to our supporting sponsors, Omega Alpha and Groundswell, who made the evening possible,” said Kinzinger Miculinic. “Raising funds for dressage is certainly not easy, and it requires the support of our entire community if we are to be able to provide funds to our riders when they need it most.

“With each dollar donated and each fundraiser we hold, C-DAAP will help our riders with funding to train and compete against the best in the world,” concluded Kinzinger Miculinic. “Following this event, Canada is one step closer to reaching the podium in international dressage.”

C-DAAP’s goal is to provide supplemental funding to Canadian dressage athletes to off-set training, competitive and educational expenses incurred during their quest for excellence, thus creating a bridge to high level national and international competition.