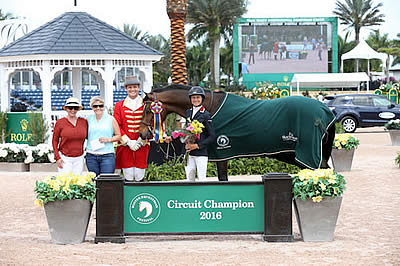 Wellington, FL – April 7, 2016 – Equestrian Sport Productions (ESP) is proud to congratulate all of the Circuit Champions for the 2016 Winter Equestrian Festival (WEF). The 2016 circuit was a huge success featuring 12 weeks of world-class competition on January 13 through April 3 at the Palm Beach International Equestrian Center (PBIEC) in Wellington, FL. The circuit awarded more than $9 million in prize money along with many other special awards. The 2016 Winter Equestrian Festival Circuit Champion Awards were presented to the top finishers in every division, based on prize money or points won.

The Chapot family continued their reign of the jumper divisions at WEF through the 2016 season. Laura Chapot of Neshanic Station, NJ once again earned the award for best Overall Jumper Rider and Mary Chapot was named the top Overall Jumper Trainer, both awards sponsored by Osphos. Laura Chapot was circuit champion of two divisions, riding to the top of the Illustrated Properties 1.40m Jumper division aboard Mary Chapot’s Shooting Star, and also topping The Crown Family 1.35m Jumper division with Mary Chapot’s Umberto.

Scott Stewart of Wellington, FL was named the circuit’s Osphos Overall Hunter Trainer for the seventh year in a row and also took the award for Osphos Overall Hunter Rider once again this year. Stewart guided Dr. Betsee Parker’s Cameo to the High Performance Working Hunter circuit championship. He also rode Stephanie Danhakl’s First Light to the circuit championship in the Shapley’s Equine Grooming Products Regular Conformation Hunter division. Cameo earned the Jay Matter Memorial Trophy as well, which is awarded to the horse with the most points in the High Performance Hunters.

In addition to his own success, Stewart guided his students to multiple circuit championships and top awards. Stewart helped train young riders Sophie and Mimi Gochman to great success throughout the circuit. The girls’ father, David Gochman, was named the WEF Osphos Overall Hunter Owner for the second year in a row, and Sophie Gochman was once again the WEF Osphos Overall Pony Hunter Rider for her success throughout the circuit.

Along with her success in the pony divisions, Sophie and David Gochman’s Mythical earned the circuit championship in the UHealth Ear Institute Junior Hunter 3’3″ division and received the Overall Owner/Rider award for the division overall.

Sophie was not the only Gochman sister to have great success throughout the circuit. Not to be outdone, Mimi Gochman rode to two circuit championships. Mimi topped the Large Pony Hunter division for the circuit riding Fair Play Farm’s Storyteller. She was also the Medium Green Pony Hunter circuit champion with Lululemon, owned by Rivers Edge.