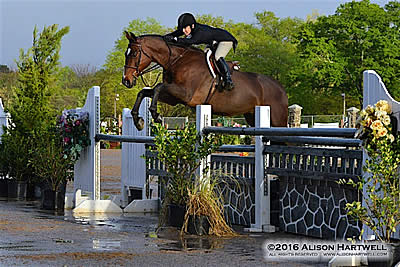 END_OF_DOCUMENT_TOKEN_TO_BE_REPLACED

Wellington, FL – September 22, 2011 – The 2011 ASPCA Maclay Regional Championships continued this past weekend with competitors for Regions 5, 6, 7 and 8 vying for the top honors in their respective regional competitions. On September 18, 2011, talented horse and rider combinations began competing to place in the top 60% of their classes, earning the top combinations an invitation to the prestigious finals held in Lexington, KY for the Alltech National Horse Show. Taking home the blue ribbon prize and winning title for their regions were Sarah Milliren, Brooke Pettet, Madison Cameron and Morgan Geller.

Competing at the St. Louis National Charity Horse Show in Lake St. Louis, MO, the Region 5 “Central” Championships were judged by Linda Andrisani and Alex Jayne. The “Central” Championships were one of the few finals that did not ask for additional testing from the judges. The riders were only judged on the course and the flat phase. The Central Region includes top competitors from AR, IA, KS, LA, MO, MN, ND, NE, OK, SD, TX, and WI. It was Sarah Milliren who rode Terrapin, owned by Walstib Stables LLC of Rumson, NJ, to the top honors, claiming the championship award. Megan Bifano and Urco, owned by Gabby Slome of Riverdale, NY, claimed the reserve championship honors.

Milliren was extremely pleased with the results, especially since this was her first time showing Terrapin. “Going to Regionals, I had no idea what horse I was going to compete with,” Milliren explained. “I had a couple to choose from, but I really liked Terrapin and his ride. He’s an awesome horse, pretty straightforward, although he does get a little crabby.”

END_OF_DOCUMENT_TOKEN_TO_BE_REPLACED

SAUGERTIES, NEW YORK (August 2, 2011) — This week, HITS-on-the-Hudson is host to some of the best junior riders in the country as it welcomes the USEF National Junior Hunter Championship – East Coast to the Saugerties show grounds.

“The Junior Hunter National Championships have been a highlight of the HITS-on-the-Hudson Summer Series and we are pleased to welcome the event back to Saugerties,” said HITS President and CEO Tom Struzzieri. “We felt strongly that this year’s Champions deserve a spot in the Hunter Prix Final and we hope this will help to contribute some additional excitement and attention to the Junior Hunter Finals.”

ASPCA Maclay Horsemanship Medal
Kendell Adelberger of Chester Springs, Pennsylvania kicked off three days of Hunter competition with a win in the ASPCA Maclay Horsemanship Medal, aboard Redfield Farm’s Werner. Adelberger is trained by Emil Spadone and topped a field of 15 to capture the blue. The group faced a technical course in HITS’ Hunter Stadium and then their equitation was put to the test on the flat.

END_OF_DOCUMENT_TOKEN_TO_BE_REPLACED

SAUGERTIES, NEW YORK (August 3, 2011) — Sarah Milliren of Sapula, Oklahoma was all smiles when the number 515 – her number – was announced as the winner of Tuesday’s USHJA/Essex Classics Hunterdon Cup, the jewel of the equitation competition at the USEF National Junior Hunter Championship – East Coast at HITS Saugerties.

Milliren, trained by Bibby Hill and Don Stewart, rode to victory in the three-round class aboard Stewart’s War Eagle. According to Milliren, her smiles were both of joy and a little bit of shock as Lillie Keenan of New York, New York was pinned second aboard Catherine Cowie’s Vidarco.

“I was so surprised when we won the class – I thought Lillie had it,” said Milliren. “I have never won anything like this before, so it is really exciting.”

She finished the first round with a score of 85 to sit sixth, and then scored an impressive 90 points in the second round, which placed her in third with a total of 175 points going in for the final test.

Milliren posted a score of 89 points in the third-round test of eight fences. Per the specifications of the class, judges Hap Hansen and Russell Frey had riders switch horses, to serve as the deciding factor for the class. Milliren, therefore, rode Scott Stewart’s Vip Z to the blue, originally ridden in the class by Victoria Colvin of Loxchatchee, Florida. Milliren, however, couldn’t deny her original mount the credit he was due.

“[War Eagle] made the course seem simple,” she added. “He was amazing and I could not have asked for a better performance from him.”