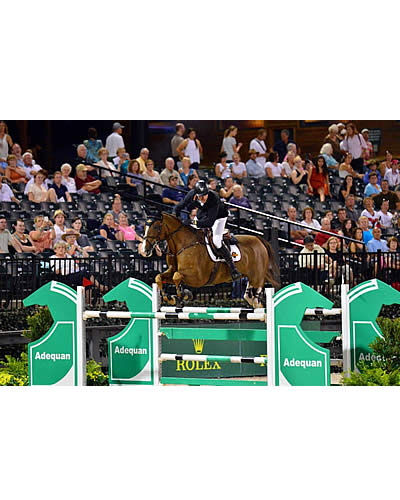 Mill Spring, NC – June 27, 2015 – In another action-packed Saturday evening at Tryon International Equestrian Center (TIEC), David Blake (IRL) and Binkie, owned by Pine Hollow Farm, cruised to victory in the $127,000 Adequan® Grand Prix CSI 3*. The duo bested a class of 35 entries to take top honors. Lauren Tisbo (USA) aboard Entre Nous followed in second with Andrew Welles (USA) and Boo Van Het Kastanjehof rounding out the top three. Competition at Tryon Summer 1 continues Sunday with the $25,000 Under 25 Grand Prix at 2pm in the George Morris Arena at the Tryon Stadium. The Tryon Summer Series will continue through Sunday, July 19.

Blake and Binkie won out in a three-horse jump-off as the last pair on course in the class, which Blake used to his advantage. Tisbo and Welles dropped a rail in both of their rounds, which left the door open for Blake to seal the win.

“I knew since there was only three of us in it and there were two good riders in front of me with Andrew and Lauren, that they would probably be quicker than me if they were clear,” he said. “When I saw Lauren’s late rail, I had to make a choice when I walked into the ring about whether I wanted to go quick and risk a rail or if I wanted to play it safe.”

The timely decision paid off for Blake, as he and the 2006 Dutch Warmblood gelding, rode a smooth and fault-free round to secure the win. The course, designed by Ken Krome (USA), saw rails drop throughout the night, which Blake commented is the sign of a true course.

“When I walked the course I thought it looked like there was space everywhere to get the job done. I knew the last line would take a decision as to what you wanted to do. There were plenty of choices there. The time was nice but Ken Krome did a great job because it was deceiving,” explained Blake. “When the first twenty horses went and there were only two clears, you knew it was going to be tough to get around clear. Fences came down everywhere and that’s the key to a good course. He did a great job with it tonight.”

The pressure was on in the jump-off round, as the riders contested a difficult track with an optimum time of 58 seconds. The long course, after a testing first round, was intimidating, but Blake felt confident as soon as he entered the ring.

“Going into fence 1 and 2 I felt like he was really operating tonight and he was really himself, so I said I’m going to play it cool and see if we can go clean. He did a great job and I’m really proud of the way he handled himself out there,” he remarked.

When asked about his mental preparation before entering the ring in such a competitive class, Blake commented that sticking to a plan is important when faults are coming throughout the course.

The win marked another great effort by Blake and Binkie, who have placed at the top of the leaderboard in nearly every class they have contested at TIEC this season. The duo has a bright future ahead, as Binkie, at only nine years of age, continues to improve and impress.

“This feels great. Everyone worked hard to make this happen and all of that pays off on nights like this. I would like to thank my owners, the Dvorkins, for everything they do to make nights like this possible,” he noted. “The organizers and partners here have done an incredible job of putting on a world-class show at a beautiful facility. We have really enjoyed being here and are looking forward to spending the rest of our summer and fall season here at TIEC.”

Aoife O’Grady, groom for Blake at Pine Hollow Farm, was the first winner of the newly announced Grooms’ Initiative Award, which is presented to the groom of the winning combination in the largest Grand Prix class above $25,000 during each competition week and will receive $500 as a part of their award. Originally from County Galway in Ireland, O’Grady joined the Pine Hollow Farm team last year to start working with Blake in only her second year as a groom.

“It feels amazing to receive this award. I’m absolutely in shock and feel so honored. It is good to know that grooms will be getting recognized for all of their hard work,” said Grady. “Binkie has been in my care since he arrived in the U.S. and I just love him to bits. He’s an absolute character and he loves to mess around and give kisses. He’s the star of all of my SnapChat stories. I love working with him and he’s a really special horse to me.”

O’Grady is an essential part of the team in the barn, according to Blake, who was quick to say that none of this would have been possible without her hard work and dedication to Binkie and the entire program.

“Aoife absolutely made this possible tonight. She spends so much time with that horse. She loves him to pieces and he knows it and feels it. He tries hard not just for me but also for her and I really have to thank her for that,” said Blake.

For more information on TIEC and for a full list of results, please visit www.tryon.com.