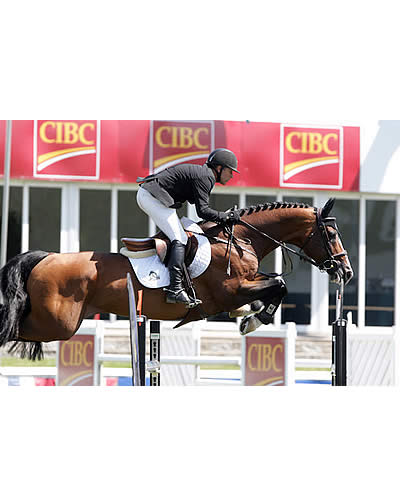 Calgary, AB, Canada – June 27, 2015 – Another day, another win for Eric Lamaze (CAN) in the ‘Canada One’ Tournament at Spruce Meadows. Lamaze guided Coco Bongo to his second win of the week with a victory in Saturday’s $34,000 CIBC Cup 1.50m. In a three-horse jump-off, the pair topped Nicola Philippaerts (BEL) and Challenge vd Begijnakker, and Shane Sweetnam (IRL) aboard Easy Contact Humlan. Also competing on Saturday, Molly Ashe (USA) and Balous Day Date won the $34,000 Friends of the Meadows 1.45m.

The day’s feature competition saw 29 entries come forward to contest the $34,000 CIBC Cup, with three clear rounds to advance to the jump-off. Lamaze and Artisan Farms LLC’s Coco Bongo were first to go over the short course and set the challenge with a clear round in 43.30 seconds. Sweetnam and Sweet Oak Farm’s Easy Contact Humlan jumped next, with one rail down in 46.96 seconds to eventually finish third. Philippaerts followed with four faults in 46.00 seconds to take the second place prize aboard Bart Keisse’s Challenge vd Begijnakker.

Peter Grant (CAN) set the tracks for Saturday’s competition in the Meadows on the Green and earned high praise from Lamaze for his efforts this week.

“I think Peter is building some very nice courses,” Lamaze noted. “That 1.50m last night was very difficult, but very fair. This one was also difficult with only three clears. The time was short, but doable, and I think his jump-off tracks are good. These days, the course designer has a lot to do with the outcome of our sport and the outcome of the week. It is important to have very good, knowledgeable course designers that understand our sport and the modern horse of today, and Peter is doing a great job this week.”

Going first in the jump-off, Lamaze had the task of setting an unbeatable pace and putting the pressure on the other riders. He did just that with Coco Bongo, the ten-year-old Rheinlander stallion (Caretino x Calido) that also won Thursday’s $34,000 Cargill Cup 1.50m.

“It was three horses, but you cannot assume that just because it is three, you only have to go a certain speed,” the rider explained. “I think going first in a three-horse jump-off, I had to go as fast as I thought I could go with him. The other two riders were very well capable of going fast. It does not really change whether you have three or twelve, if you go first, you have to go for it and that is what I did.”

Lamaze has used the first three weeks of the Summer Series at Spruce Meadows to develop Coco Bongo and work on the horse’s speed in the jump-offs.

“These weeks are nice because you do learn a lot about your horse competing in the different arenas and it gives them some good mileage,” Lamaze acknowledged. “One thing I have learned about Spruce Meadows is that even if it is a 4* or it is in the Meadows in the Green or it is in the International Ring, there is no competition that is easy. It is always good sport and it is always difficult to win here.”

“Really until the jump-off in the grand prix two weeks ago, I had never asked Coco Bongo to go fast,” Lamaze continued. “I really chose these 1.50m competitions to teach him to go fast and to learn more about him going fast over a height that is not 1.60m. I was in a couple jump-offs at 1.60m and I did not risk very much. I just took my fifth or sixth place and went home, so this is great for me to learn about him and his reaction at different speeds. It is part of the learning process of any horse.”

With the Pan American Games on the horizon in July, Lamaze has also planned the schedule for his horses accordingly.

“We have strategy for the Pan American Games in the back of our minds,” he explained. “We have a big event coming up, so this week it would be tempting to do the grand prix for $126,000 tomorrow, but for his schedule and what I am doing with him right now, these two 1.50m were well fitted for him.”

Molly Ashe (USA) rode to victory in Saturday’s first competition in the Meadows on the Green aboard Louisburg Farm’s Balous Day Date. Ashe and the ten-year-old Oldenburg mare (Balou du Rouet x Domino) won an 11-horse jump-off out of 67 original starters to top the $34,000 Friends of the Meadows Cup 1.45m. They completed the fastest of six double clear rounds in 46.12 seconds.

Ashe started riding Balous Day Date this winter in Florida and was quickly impressed with the mare’s incredible talent and natural style.

“She is feisty,” Ashe detailed. “She is a great horse. She is a trier and she is a fighter. She is very sure of who she is, and she is just one of those point and shoot, super fun horses to ride. She does not want to touch the jumps, and she naturally knows how to get out of the way, so you just have to not get in her way. Her technique is incredible. I have to thank Louisburg Farm and Beth Johnson for the opportunity to ride her.”

Heading into the jump-off, Ashe knew the group of very fast horses and riders that were still to come, and knew she needed to execute a flawless round to be victorious.

“I have not met a jump-off here yet where you have not had to be spot on,” the rider stated. “It is incredibly competitive here, so I knew there was no margin for error. I just tried to go as neat and tidy and smooth as I could with her and make all the inside turns. She was spot on every step of the way. I was lucky because the one oxer turned up perfectly off the turn; I just turned and it was right there. That was giving people some trouble, but everything just turned up for me today. That was nice; it does not always happen that way.”

Balous Day Date was a little over faced with a 1.55m competition during the first week of the Summer Series, so she moved down for a couple of weeks to get her confidence back. With the boost of a good win this weekend, she will now move back up to compete in the International Ring during next week’s ‘North American’ Tournament.

“We sort of made a mistake the first week and put her in the big 1.55m competition. Then we backed off a little bit to make sure she did not lose her confidence,” Ashe explained. “I think we got everything back to where it should be. She feels solid as a rock now, so back we go in the big ring next week.”

“I think the 1.45m is very comfortable for her now. She still does not have a lot of experience with the big guns, but she is getting there,” Ashe noted. “She is learning to go faster. Today she was right there and I think she got it because she was so smooth. She jumped great.”

The ‘Canada One’ Tournament concludes on Sunday highlighting the $34,000 West Canadian Cup and the $126,000 Imperial Challenge.