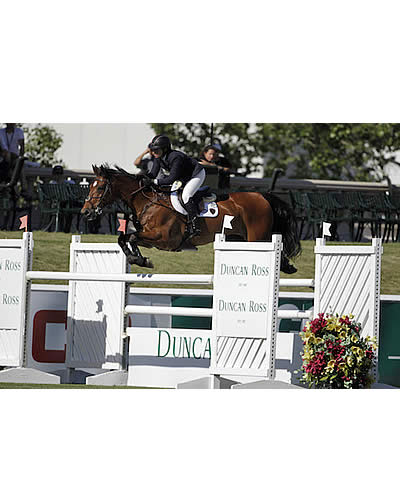 The ‘Canada One’ Tournament features over $431,000 in prize money with top horses and riders from around the world competing in eight FEI sanctioned events through Sunday, June 28. The weekend’s headlining events include the $34,000 CIBC Cup, the $34,000 West Canadian Cup, and the $126,000 Imperial Challenge.

Peter Grant (CAN) set the courses in the Meadows on the Green for Friday’s international competition. The evening’s feature Duncan Ross Cup 1.50m saw 50 entries in total, with five advancing to the jump-off where Beezie Madden and Simon emerged victorious.

Margie Engle (USA) and Elm Rock LLC’s Royce set the pace with a double clear round in 44.67 seconds to eventually finish in reserve. Nina Fagerstrom (FIN) and Finca Horses, Inc.’s Flower followed with a clear short track in 44.67 seconds, landing the pair in third place overall. Madden and Simon took the lead next with their clear round in 43.37 seconds. Todd Minikus and Two Swans Farm’s Babalou 41 were faster in 41.05 seconds, but settled for fourth place with a rail at the final fence. Last to go, Sameh el Dahan (EGY) crossed the timers in 43.41 seconds, but one rail came down to put the rider in fifth place aboard his own and Joanne Sloan-Allen’s Sumas Zorro.

Second in all-time prize money winners at Spruce Meadows only to Canada’s Eric Lamaze, Madden is no stranger to the winner’s circle in Calgary. This was the rider’s first win in this year’s Summer Series, however, and she was happy to lead the victory gallop.

“It is my first win here this year, and I was not here last year, so it feels good to win here again,” Madden acknowledged.

“When there are not as many in the jump-off it is good for me. I can’t always let him run really fast because he gets pretty strong,” Madden explained. “He was actually particularly good today in the jump-off and I was able to kind of keep him under control in the turns. He made really good turns to the double and to the second to last fence.”

“I figured Todd is always going to go faster than me and Sameh is also very fast with that horse, so I thought that I should just do what works for me and hope it was good enough. It ended up working out, but I got a little lucky,” Madden admitted.

Speaking of the first round track, Madden added, “It was an excellent course for me because the distances were all a little short and I could make my horse wait. Not only was it a good course for me to do, but it was also a good set up for Sunday’s grand prix for me. It was a very technical course to make the horse add strides and he did it well.”

After his winning round, Simon casually strolled in to accept the winning prize. Madden noted that he enjoys the ceremony and wears his winning cooler with pride.

“He looks like a hot horse because he is so strong, but he is actually kind of a relaxed horse when he is not in competition mode,” Madden detailed. “He knows he is done and he is going in for ribbons. He can eat some grass, so he likes that.”

Friday’s first competition in the Meadows on the Green was the $34,000 WestJet Cup 1.45m, which saw 77 entries compete, with 22 clear rounds to advance to the jump-off. Eight of those entries then cleared the short course without fault. USA’s Todd Minikus took the victory in a blazing fast time of 35.48 seconds aboard Nancy Gooding’s 12-year-old Westphalian stallion, Con Capilot (Con Capitol x Pilot).

Con Capilot was previously ridden by California’s Mandy Porter for several years and had a lot of good results. The horse’s owner then sent him to Minikus at the end of the winter this year to be sold.

“He is a beautiful, drop dead gorgeous horse,” Minikus stated. “He has great technique over the jumps. He is quick in the air; there is no wasted energy, and that is what it takes to win.”

Minikus showed Con Capilot in Kentucky this spring and explained that he did not have great results in the first two weeks at Spruce Meadows, but continues improving.

“I watched the first couple riders go (in the jump-off) and there were some fast rounds,” Minikus detailed. “Then I was up in the warm-up ring flatting and all the likely suspects started showing up. When Eric (Lamaze) took the lead, for sure I knew it was fast, so I just tried to cheat everywhere I could and somehow it was good enough.”