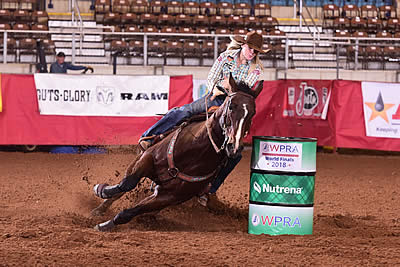 Jackie Ganter and Howes A Tycoon at the 2018 WPRA World Finals. (Photo courtesy of Phifer Photography)

Abilene, TX (December 19, 2018) – When faced with setbacks like Angela Ganter and her daughter, Jackie, have experienced recently, most riders would simply hang up their cowboy boots and call it a day. But for this mother-daughter duo of barrel racers, victory comes in many forms simply because they refuse to give up on each other. 2018 has proved to be a great year for both women, in spite of the challenges thrown at them. Angela is back in the saddle after a long and rigorous battle with breast cancer and Jackie is racing to the top of the Women’s Professional Rodeo Association (WPRA) after a very rough start to the year.

For Angela, the thought of being a top-rated barrel racer after 8 years of battling breast cancer seemed pretty far out of reach.  However, with the help of her daughter, Jackie, and an awesome new horse, Angela has found herself back in the rodeos and riding better than ever.  “I bought a horse in February of 2017 after trying to put myself back together from being sick,” she explains. “Then, in March of 2017, Jackie told me one day that she didn’t think I was trying hard enough to fix myself – my balance and my nervous system. So I hired a trainer and got my balance back and I also found another horse who taught me how to run barrels again.”  Angela continues, “Then, about January of this year, I decided I was ready to have a better horse.” She describes how she found and bought a horse named Bogie French Bug after riding him for about 20 minutes at the stock show in Fort Worth. “Since then I’ve won six pro rodeos in Canada this year on him and made the Canadian Finals.  It was just kind of a dream come true and he’s just kind of a miracle for me!”

Looking forward, Angela says she has her sights set on making it to Calgary in 2019. “I’ll probably ride better now than before I got sick,” she explains. “After being sick for eight years, I guess you wake up and kind of decide that any day can be your last day, so you better make the best of it.”  She goes on to say that her main focus, however, is to help Jackie get to the National Finals Rodeo (NFR). “Whatever that takes, that comes first,” she insists.

Angela and Jackie have been traveling together for the last several years since Jackie has been in the WPRA. They usually haul 4 or 5 horses to each rodeo. Jackie explains, “We get to travel together, we get to compete together, and it’s fun when we can win together!  That’s something that a lot of people don’t get to experience.”  Jackie says that this year started out with a much different story than others. In only her second rodeo of the year, a horse fell on her and broke her ankle. She was out of the saddle all winter, and then explains that she tried getting back on too soon and couldn’t ride to the best of her ability. To top it off, two of her horses were injured and so she was down to only one main horse. “Then, in July,” she continues, “I got a phone call asking me to ride a horse in one rodeo.”  Jackie ended up winning the first round on him, and then, after the short round, she and her mom asked the horse’s owner, Gayle Howes, if they could buy him.  “She thought we were a perfect match,” Jackie smiles. She was definitely right about that.  Since then, Jackie and the 10-year-old gelding named Howes A Tycoon have been an unstoppable force. “I placed everywhere I took him,” Jackie remembers. “He got me in the top 50 for the year end, and then, when the new year started, we went to the WPRA Finals and won, which got us a spot in the Houston Rodeo next year.  So he’s been a huge blessing,” she adds. “He’s just amazing!”