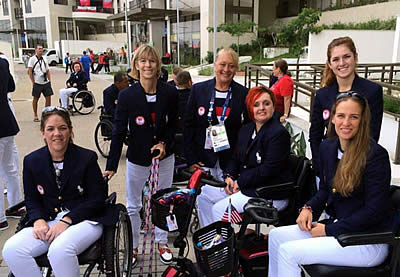 Rio de Janeiro, Brazil – Equestrian competition at the Rio Paralympic Games got underway at the Deodoro Equestrian Center Saturday with the horse inspection. A total of 76 athlete-and-horse combinations representing 29 countries, including 14 in the team competition, are set to compete over the course of the week for Paralympic medals and national pride. The U.S. will be represented by the team of Sydney Collier, Rebecca Hart, Margaret McIntosh, and Angela Peavy. Roxanne Trunnell will represent the U.S. in Individual competition. The U.S. squad is led by U.S. Para-Dressage Chef d’Equipe Kai Handt.

The U.S. athletes will compete as follows:

Grade Ib athletes will perform their Team tests Sunday afternoon. Representing the U.S. will be the youngest athlete in the field, Collier (Ann Arbor, Mich.), competing in her first Paralympics with Wesley Dunham’s 2003 Oldenburg mare, Western Rose. The pair began the year with strong placings at the Adequan Global Dressage Festival and went on to become the 2016 USEF Para-Equestrian Dressage High Performance Division National Champions in June.

In Grade Ia, the U.S. team will see Margaret “Gigi” McIntosh (Reading, Pa.) and her longtime partner, Rio Rio, a 2006 Rheinland mare. Though Rio will mark the pair’s first team appearance in a Paralympic Games or World Championships, they have had consistent top results over the past three years. During this year’s winter season in Wellington, Fla., they posted five wins in Grade Ia CPEDI3* competition, including as members of the Gold medal-winning U.S. Team.

Also riding in the Grade Ia will be individual Trunnell (Rowlett, Texas) in her Paralympic debut, aboard Royal Dancer, Julia Handt’s 2005 Westphalian gelding. The pair has been competing at the international level together since early 2015 and have always placed within the top four. They were a part of the U.S. Team that clinched the Team Gold medal at the Wellington CPEDI3* in January.

Anchoring the U.S. Team will be two-time Paralympian Hart (Wellington, Fla,) with her own Schroeters Romani, a 2002 Danish Warmblood mare. Competing as a Grade II athlete, Hart won in all of her outings with Schroeters Romani during the winter season, also contributing to the Gold medal-win for the U.S. Team at the Wellington CPEDI3*.