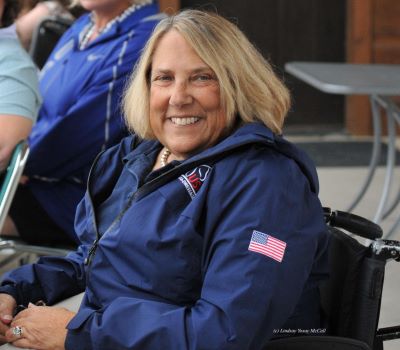 Sleep may be the only thing Hope Hand did not do well, and it would be no wonder since she gave 110% of her boundless energy and time to Para Equestrian Sport and Para Dressage. Constantly promoting, recruiting, educating, and encouraging everyone she met as she traveled at her own expense to all US International and National Championship competitions and to numerous Para Dressage symposiums, clinics, and Centers of Excellence. Hope not only knew every US Para Dressage athlete from emerging to elite, but recruited many of them, and was available 24/7 to all to advise, encourage, and educate them on their journey to be the best. Hope is well known in the equestrian world globally for her tireless work in advancing Para Equestrian sport and has served on numerous boards and committees, all in the pursuit of bringing competition excellence to the US in Para Dressage.

Two-time Paralympian Barbara Grassmyer and close friend of Hope remembered their time together. “Hope and I traveled many miles together. We were competitors first then became close friends. It was always an adventure when traveling with Hope. From flat tires in Germany to her being carried up two flights of stairs to the train by my Dad and the Mayor of the small town in Germany. She had a big smile and thrived on the adventures we had together. While we were in England, we decided to go to a safari park. While driving through the monkey area, a few came through the sunroof, making us laugh. Hope had a heart of gold and made sure everyone around her had a fantastic time. She became my mentor and then when my parents couldn’t make the international trips, she became my show mom. While I was horse shopping, I called her to tell her I found my dream horse. She didn’t like it when I informed her that Mibis was a chestnut mare. She came to love Mibis almost as much as I did. When Hope retired from competition, she took on yet another role as president of the USPEA. Without Hope the United States Para Dressage program would not be where it is today. In 2021, we had a watch party for the Tokyo Paralympics. We all stayed up all night cheering on the USA team. We both had tears of happiness when the team won the bronze and Roxie Trunnell won the gold medals for the United States. I enjoyed my time with the Hand family especially when I stayed with them for two summers before the Athens and Hong Kong Olympics. Their family was my family, and I watched her daughter Amy grow up, I watched Hope become a grandmother to two grandsons, and I met many of Hope’s dogs over the years. Hope was one amazing lady who never took no for an answer. She is greatly missed by her west coast family.”

Hope’s list of accomplishments and committee representations were always to help promote and grow the sport of Para-Dressage. Her achievements are as follows:

Tina Wentz who serves as interim President of the USPEA is also a mom of Jonathan Wentz who was a Para Dressage rider that rode on the U.S. Team 2010-2012. Wentz noted, “I had the incredible privilege of working alongside Hope since the time she first formed the USPEA, and I have yet to figure out how she was able to do the work of ten every single day, always with a twinkle in her eyes. I met Hope because of my son Jonathan. Hope and Jonathan, also a Paralympic equestrian, shared the same competitive spirit and independent mindset of never considering their disability but in developing their abilities. They saw themselves as parallel to able bodied athletes and fiercely promoted that to others. Para means parallel.”

Wentz continued, “The board of USPEA and all who knew and loved her will strive to continue her vision of Para truly being parallel, with ALL athletes focused and working together to improve their ability in equestrian sport and life. Hope was a remarkable and irreplaceable individual that I am so thankful to have known as a kindred spirit and friend. And I know she’d say to all of us don’t stop now, you must carry on!”

A memorial service is being planned later this year. Details will be published once confirmed. Follow United States Para Equestrian Association (USPEA) on Facebook to up to date on information.