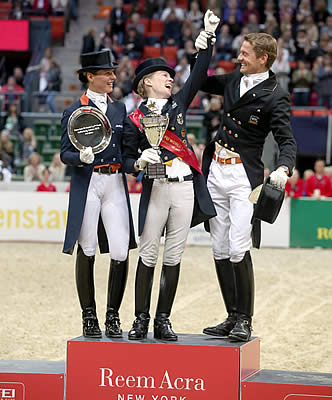 Gothenburg (SWE), 27 April 2013 – Germany’s Helen Langehanenberg lived up to all the promise she has shown over the last few seasons to clinch the 2013 Reem Acra FEI World Cup Dressage title in style today with the fabulous stallion, Damon Hill. She was a lady on a mission from the outset, driven on by the huge hunger she felt after having to settle for runner-up spot at last year’s Final before missing out on individual bronze at the London 2012 Olympic Games by an agonising 0.03 percentage points.

Today the 30-year-old rider pushed all that into the past, producing a breath-taking performance that catapulted her into the lead when fourth-last to go of the 17 through to the closing stages. And despite their best efforts, defending champion Adelinde Cornelissen and her Dutch colleague Edward Gal could not do better, having to settle for second and third places respectively.

Langehanenberg is the eighth German rider to take the coveted trophy in the history of the FEI World Cup Dressage series, and the first since Ulla Salzgeber and Rusty did a back-to-back double in 2001 and 2002. “It’s just a dream come true; it’s a great feeling!” she said afterwards, hardly daring to believe what she has achieved. But her success was hard-earned, as this Final was fiercely fought by some of the most polished, talented and experienced riders the sport of Dressage has ever produced.

It was Italy’s Valentina Truppa and Fixdesign Eremo del Castegno who were out in front at the half-way stage. The 27-year-old from Milan, who competes in the uniform of the Caribinieri and is daughter of Dressage judge Enzo Truppa, threw down one of her daring trademark performances that included one-handed piaffe for a score of 79.696. This relegated the previous competitor, Denmark’s Sidsel Johansen, to temporary runner-up spot with Schianto, who thoroughly pleased the crowd with one of his best tests of the season for a mark of 75.393.

Sweden’s Minna Telde and Santana didn’t threaten with their mark of 74.107 when next into the ring as the action resumed. And although 23-year-old Dane, Anna Kasprzak, showed lovely, balanced passage throughout a thoroughly steady test with the 14-year-old Donnperignon, her good mark of 77.857 still left Truppa out in front.  Sweden’s Patrick Kittel and Watermill Scandic HDC met a wall of sound from the spectators when entering the arena, but despite great piaffe and passage their score of 78.393 wouldn’t upset the leader or the top end of the scoreboard either. It took German veteran, Isabell Werth and her “work in progress” Don Johnson FRH to do that when raising the game with a score of 80.429 with just four more left to go.

But Langehanenberg set a whole new standard when next in, her stallion punching out great piaffe and passage and devouring the ground with his long, loping walk as they executed their floor-plan with absolute accuracy. Any fear that the one-tempi canter changes would haunt them after their error in this movement during Thursday’s Grand Prix were dismissed by the consummate coolness of it all. Clearly this was a test that would take some beating as the scoreboard showed 88.286.

Tinne Vilhelmson-Silfven could have been intimidated to find herself and Don Auriello sandwiched in between Langehanenberg and 2010 Reem Acra champion Edward Gal from The Netherlands, but instead the Swede simply rose to the occasion. Her elegant 13-year-old bay gelding showed wonderful extended trot en route to a mark of 82.661 to show that his place amongst the stars was well-deserved. Gal then followed with the “dark horse” of this Reem Acra Final, the black gelding Glock’s Undercover who some thought might just spring a surprise in the closing stages. But while the 12-year-old horse demonstrated exquisite piaffe and passage their total of 84.446 was well short of Langehanenberg’s target.

Only defending champions Adelinde Cornelissen and Jerich Parzival now stood between the German and the biggest result of her career, and the Dutch rider’s big gelding was his usual flamboyant self as he strutted his way through passage, piaffe and his trademark pirouettes. The crowd held their breath as the judges took their time in posting their marks. But when 86.214 came up on the scoreboard it was clear that the hat-trick Cornelissen had been hoping for would not materialise and it was Langehanenberg holding the Reem Acra trophy aloft at the end of the day.

The German rider has trained with double Olympic gold medallist Klaus Balkenhol for the last 10 years and her back-up team also includes her parents, particularly her mother who travels to all her shows, and her husband Sebastian who steps into the coaching role in Balkenhol’s absence. She said this evening that one of the things that amazes her about her horse is his continual improvement and his self-assurance.

“He gave me so much confidence during the test today, it felt like the best test we have ever done, I was scared to do too much but he told me, “take it easy Helen, we can do this together!”

She reflected on what has happened over the last eight months or so. “After London (Olympic Games 2012) I wondered what we could do, because I thought it was already perfect, but this is my horse, I think it’s perfect and then he just does it   even better again, he is amazing! He really is something special, he can read and write!” she said.

Cornelissen was pleased that she didn’t encounter the problems she faced during Thursday’s Grand Prix. “It was a lot better this time, no spooks; I just gave it my best shot and I’m very happy with the day. I love my new music but we are not on automatic with it yet; we are still getting used to it. In another couple of shows it will be perfect!” she said.

Gal said, “I had a great ride and I’m quite happy with him (Glock’s Undercover). He needs to get more used to the atmosphere in an arena like this, where the crowd goes right above his head. He has a lot more to learn, things that I can’t train at home, so we need to do more shows and he will get more confidence and that will help us to be even better.”

Fourth-place Tinne Vilhelmson-Silfven was rightly pleased with her result. “It was an amazing feeling with the atmosphere and the audience, and I’m kind of proud of sitting up here with you guys,” she said looking over at the top three riders. “I think we did pretty well. Don Auriello is changing all the time; he is getting stronger and more mature; he is continually improving,” she added.

Ground Jury member, Sweden’s Gustav Svalling, pointed out that five horses got a score of over 80 percent today. “It was super riding; they are incredible athletes and I was so pleased to be judging.  It was very tight, Helen was fantastic, her horse has such a good walk and Parzival was so close. I gave Edward a 10 for piaffe and transitions; they were so soft, but the walk for his horse is not the strongest while Helen’s horse has a super walk,” he pointed out. “Before Totilas we (the judges) didn’t give 10s, but now we do,” to which Gal quickly retorted, “So you all have to be thankful to me for that!”

The mood was celebratory as the Reem Acra FEI World Cup Dressage Final drew to a close. There was the sense of the time having come for Langehanenberg to shine and for the new champion it is now time to step back and enjoy her success.

During the week she was one of the many to stand and admire the fabulous dresses designed by sponsor Reem Acra that were on display. She was wondering how she might look in one of them. Perhaps, after today’s success, she might just find out….

Italy’s Valentina Truppa and Fixdesign Eremo del Castegno were leading at the halfway stage on a score of 79.696.

The Netherlands holds the record, with 12 victories in total.

It is 11 years since the last German win, recorded by Ulla Salzgeber and Rusty who registered back-to-back victories in 2001 and 2002.

All three riders on today’s podium are Reem Acra FEI World Cup Dressage champions.  Third-place Edward Gal held the trophy high after victory with Totilas in 2010, and runner-up Adelinde Cornelissen from The Netherlands was back-to-back winner in 2011 and 2012.

The newly-crowned Reem Acra FEI World Cup Dressage champion, Helen Langehanenberg from Germany is 30 years of age and is based in Havisbeck, Germany.

With the stallion, Damon Hill NRW, today’s winner Helen Langehanenberg helped Germany to team silver but finished just outside the medals, in fourth place at the London 2012 Olympic Games.

Helen Langehanenberg, when asked if she thinks there is room for much more improvement in the work shown by her stallion, Damon Hill NRW” – “Maybe a little, but for now I just want to enjoy this first!”

Edward Gal – “My horse can be very relaxed in training but when he comes into the arena he gets tense.”

Helen Langehanenberg – “Dame is a breeding stallion, so sometimes I take him out of work for 10 to 14 days to breed but he’s not at all difficult when he comes back to be ridden – he’s a very easy horse. He has six-year-olds on the ground now and I have three of his youngsters riding and two more waiting in my barn.”