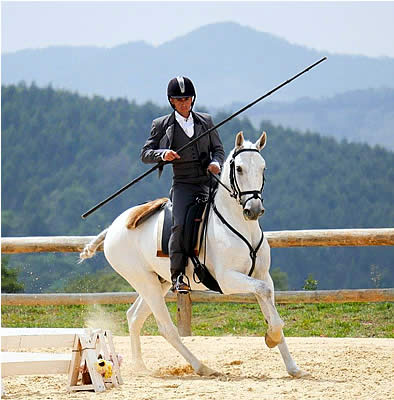 Itapira, SP, Brazil (January 4, 2018) – From the tropical countryside of Brazil to the mountains of Germany, the Interagro Lusitano sporthorse continues to make its mark in the emerging discipline of working equitation. The stud and training center has now developed hundreds of nationally and internationally successful Lusitanos in working equitation, as well as dressage, driving, endurance, and show jumping. From Working Equitation World Cup champions to US and European exports, Interagro’s status as a breeder and developer of victorious working equitation Lusitanos has reached that of a world power.

As the most influential bloodline in working equitation, Interagro horses have racked up wins on four continents in the demanding discipline, which was born from the athleticism, suppleness, and partnership required of working horses for daily tasks around the farm and features three core phases: dressage, obstacles, and speed. Most notable among Interagro’s resume of performance horses is Xaveco Interagro, who with France’s Claire Moucadel at the reins was victorious in the 2016 Brazilian Working Equitation World Cup. Xaveco and Moucadel went on to many working equitation successes, including being awarded the Haras Cup during October 2017’s Haras dos Cavaleiros event, the premier working equitation competition in North America.

Antiochus Interagro also made headlines during the summer of 2017 as a top competitor on the German working equitation scene, while youngsters from Interagro’s I Generation made their debut at the national level in Brazil in October. Incrivel and Inquisidor Interagro, ridden by Edmar Martins Brito and Alexandre Souza, placed first and second in the Novice A division. Another working equitation talent, Empreitero Interagro, with Edmar Brito at the reins, won the Preliminary division. Over the past two years, Interagro’s placings at various levels from Novice to Master have been too many to list, with generations of Interagro Lusitanos converging at various shows and completing alongside each other.

In April of 2017, during the first phase of the Brazilian Working Equitation Championships, horses owned both by Interagro and clients from the farm’s spectacular national Yearling Auctions over the past 17 years navigated the courses and tests. Two young horses, Hanibal Interagro and Hector Interagro, displayed exceptional talent at their show debut; Hector has since been sold to the US while Hanibal was successfully revised as a stallion and added to Interagro’s breeding program. At the time of Hector’s international sale, he was the rankings leader in the 2017 Brazilian Working Equitation Ranking. Also during the first phase of the ranking, Feitor Interagro and Divisadero Interagro advanced to the Preliminary and Master levels, kicking off advanced working equitation careers. Heliodoro Interagro, owned by Alexandre Siqueira and sold during the 13th Annual Interagro Yearling Auction in 2012, was also an active competitor, along with Porfirio Interagro, stunning and competitive at 21 years young, representing the eldest of Interagro’s horses competing at the working equitation championships with his amateur rider Suely Moraes. Porfirio was sold as a 2-year-old in 1997.

As one of the fastest growing equestrian market segments, working equitation is traditionally Portuguese, as is the Lusitano breed, which is the most popular mount for the discipline. On Interagro’s 1,300 acre stud and training center, the concepts of working equitation are used as much outside the competition arena as within, during the daily tasks of managing its 3,000+ horses and the property itself. As such its Lusitanos are naturally inclined towards the discipline, which includes dressage, obstacles, speed, and cow events.

For more information on Interagro Lusitanos, Interagro’s horses for sale, or the Lusitano bloodlines, visit Interagro’s website at www.lusitano-interagro.com. To organize a trip to Brazil or for any questions regarding sales or the logistics of importing horses to the US, contact their US Sales Representative, Peter van Borst at 817 368 9447.