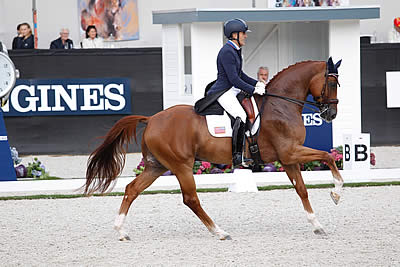 Whitehouse Station, NJ (June 11, 2018) – Consistency is everything in dressage and since 2012, internationally celebrated rider and trainer Dr. Cesar Parra has been qualifying some of the brightest rising stars in the sport for the USEF Developing and Young Horse National Championships. This season will be no exception.

Dr. Parra and his team are in the process of qualifying five exceptional horses to represent Piaffe Performance and GK Elite Sport in the national championships this August 21-26 during the US Dressage Festival of Champions at Lamplight Equestrian Center in Wayne, IL. “They’re quality horses. I’m in love with all of them,” he says, referring to the extraordinary depth and breadth of talent each horse represents: Throughout the 2018 show year, all five horses – Fashion Designer OLD, GK Don Cesar, GK Sir Beckmann, Supremont, and Furstin P — have ranked nationally at or near the top of their division.

Defending their 2017 title will be Parra and Fashion Designer OLD, currently third on the USEF Developing Horse Grand Prix rankings on a 70.032% average. “He won last year and is destined to be an amazing Grand Prix horse,” he says. “I love bringing young horses like him through the stages and giving them the best chance to bring the best out of them. He’s really a character. In his stall he’s a puppy dog but under saddle, his strength and dominance show through.”

Coming into the USEF Developing Horse Prix St Georges National Championship with a 70.993% are Parra and GK Don Cesar, whom he describes as a “nice, happy horse, who is always willing to please.” Parra has shaped that same willing attitude into the current leader (8.20) on the USEF Young Horse Dressage Six-Year-Old Division leaderboard, GK Sir Beckmann: “Like all the horses qualified this year, he came to us as a three-year-old and is such an effortless performer, with an undeniable talent.”

As confident as her trainer in her own caliber is Parra’s one mare among the qualifiers, Fürstin P, who is in the top three with a 8.140 in the USEF Young Horse Dressage Five-year-old division, ridden by Roberto Brasil and owned by Dr. Heather Hornor. He adds with a laugh, “She’s a prima donna. She knows she’s good and that she’s pretty, and she’s right!” But she’s also not alone. Parra has a second rising star joining her in that division, Supremont, ridden by Merita Hagren and owned in partnership with Dr. Heather Hornor, coming in with a 7.530.

“I’m very proud of all the horses, and excited and grateful to everyone who has been so supportive and nice to us throughout the season. We have consistently qualified to go to the national championships for several years now,” says the Parra, estimating that over the last decade he has trained and ridden more than a dozen horses down USEF National Championship center lines.

Referring to his own deep well of experience competing internationally that he will bring to Lamplight Equestrian Center, the Olympian, Pan American Games Team Gold medalist, Nations Cup Silver medalist, and two-time FEI World Equestrian Games™ and FEI World Cup™ Finals veteran says, “As a rider, the more experience you have of course gives you greater possibilities. Going to the US Nationals with European experience helps (Dr. Parra and GK Don Cesar were the only horse-and-rider pair to represent the United States in the 2017 Longines FEI World Breeding Dressage Championships for Young Horses last summer), as there will be a lot of great riders and horses at our National Championships, so you can’t take anything for granted.

“It would be very rewarding to do well at the national championships and go on to represent the United States in Europe with these horses in the future.”

Consistency, in both Dr. Parra and in the horses he trains, suggests he’ll be keeping his passport handy.

Follow Dr. Parra and all the rising dressage stars he has in training and learn more about his lessons and services at www.piaffe-performance.com and on Facebook @PiaffePerformance.