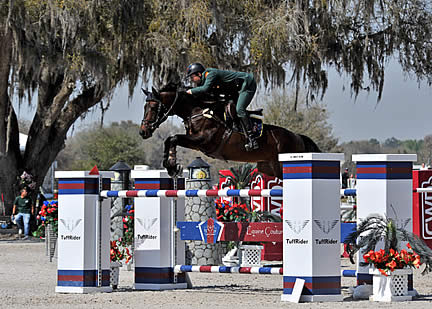 ©ESI Photography. Santiago Medina and Monterrey EJC rode to the top of the $25,000 SmartPak Grand Prix.

OCALA, FL (March 7, 2013) – Santiago Medina was nothing short of regal when he entered the ring today at HITS Ocala. Donning a military uniform turned show coat, Medina and his own Monterrey EJC jumped their way to a win in the $25,000 SmartPak Grand Prix, presented by Zoetis, this afternoon. A captain in the Columbian Army, Medina has been carefully prepping Monterrey EJC for their upcoming appearance in the FEI World Cup Finals in Göteborg, Sweden.

“He has been really focused on using his time in Ocala to be very prepared for the World Cup Finals,” said Manuel Torres, who trains Medina.

He piloted his nine-year-old Holsteiner stallion to victory over a course designed by Bernardo Cabral of Lisbon, Portugal. The first-round course included 12 obstacles and 15 jumping efforts, including a double combination at fence six and a triple at 11. While the combinations, proved manageable, it was the fences in between the two that prompted the most faults. Seven were clear in the first round, topped by Medina who returned first for the jump-off.

“I knew that if I was going to win, speed was the only way to get it done,” said Medina. And speed is exactly what he used – he and Monterrey EJC posted a clear round in the first trip in 40.54 seconds.

The next clear came from Adrienne Iverson of Califon, New Jersey aboard Redfield Farm’s Ultimo. They left the rails up, but were two seconds shy of bumping Medina from the lead. Iverson finished in second place with a time of 42.53 seconds.

Two more pairs were able to crack the code to finish without faults: Lauren Patava of Ontario, Canada aboard Bonaventure Farms Sly rode to 44.18 seconds for third, and Erin Haas of Ann Arbor, Michigan claimed fourth in the irons of North Face Farm’s Casino Van de Helle. Lisa Goldman of Hawthorn Woods, Illinois capped the top five with her own Morocco. She was the fastest of three four-fault rounds in the jump-off with a time of 40.04 seconds.

Sunday will deliver another opportunity for grand prix riders to return to the spotlight with the $50,000 Purina Animal Nutrition Grand Prix, presented by Zoetis. The final two weeks of show jumping at HITS Ocala will present opportunities for pivotal Zoetis $1 Million Grand Prix qualifying leverage and will conclude with the $100,000 Sullivan GMC Truck Grand Prix, presented by Great American Insurance Group, Sunday March 17.

Michael McCormick of Flower Mound, Texas was second with MTM Farm’s MTM Remington, while Michelle Vandal of Mississauga, Ontario and her own VDL Viper H took third. Robin Walker of Grasslake, Michigan finished fourth with Patrice Schreiber’s Under The Radar, and Erin Haas rounded out the top five with Casino Van de Helle.

Brook Ledge Horse Transportation presents weekly jumper classes at HITS Ocala, aside from the winner’s purse, Brook Ledge Open Welcome riders also compete for the Brook Ledge Rider Bonus. The award, given at the conclusion of the nine-week competition, includes a $1,500 shipping credit for the rider who accumulates the most points in those classes throughout the HITS Ocala circuit.