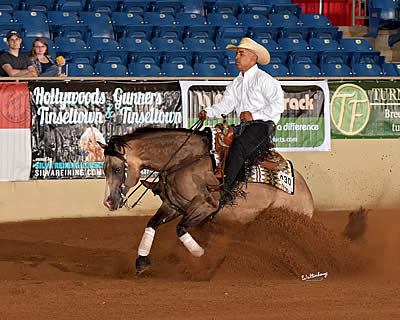 In the Adequan $10,000 Added USEF Open National Championship presented by Markel Insurance, Mills (Scottsdale, Ariz.) and Wimps Cool Breeze performed a great round across the board to impress the judges as they performed pattern nine. Mills and Janice Dickson’s seven-year-old Quarter Horse stallion earned a score of 221.5 to win the championship.

“I think the horse really circled well. It felt like a round where nothing stood out more than anything else. It was a really solid round from start to finish, but if I have to pick something, I would say the circles were very good,” Mills said of his ride on Wimps Cool Breeze. “I have had this horse going for quite a while, and he has always been good in the show ring.”

Mills last won a USEF national championship title in 2006 and was happy to add another accolade to his resume. “It feels great and feels great for the owners. This is their second experience with an FEI/USEF horse. … We are aiming for the WEG [the FEI World Equestrian Games] next year.”

Casey Deary (Weatherford, Texas) finished second and third after finishing one point apart on his two mounts. Deary and Reeboks Rerun, his son Owen Deary’s 15-year-old Quarter Horse gelding, took the reserve champion title with a score of 219.5, while he and Who Dat Hot Chic, Neiberger Performance Horses LLC’s seven-year-old Quarter Horse mare, finished third with a score of 218.5.

Fresh off his trip to the 2017 SVAG FEI World Reining Championships for Juniors and Young Riders, McCutcheon (Aubrey, Texas) rode REF Sturgis to the win in the 14-18 division of the $2,000 Added USEF Youth National Championship. He and Anne-Marie Burns’s five-year-old Quarter Horse gelding had a solid performance of pattern 12 to receive a score of 219.0.

“He was really good. Easy. His circles were good, he stopped well, and the whole round was pretty dang good,” McCutcheon said of his first-ever ride on REF Sturgis. “It feels good. This was my first time in this division, so it was fun to do something new.”

Dani Latimer (Marietta, Okla.) was McCutcheon’s teammate on the Platinum Performance U.S. Young Rider Team at the world championships, and she was not far behind him. She and Sparklin Nite, Elaine Latimer’s five-year-old Quarter Horse stallion, scored 217.5 to be named the reserve champion. Blair Thompson (Amarillo, Texas) and Whiz N Chica Dee, her own eight-year-old Quarter Horse gelding, finished third with a score of 214.0.

In the $2,000 Added USEF Youth National Championship 13 & Under division, Reynolds (Whitesboro, Texas) and Gun Whiz It laid down a good run of pattern 12 to finish atop the leaderboard. Reynolds and Tammy Reynolds’s six-year-old Quarter Horse mare won with a score of 212.5.

“It was very good; we were together on all maneuvers. She was really with me,” Reynolds said. “It’s really amazing! I’m very thankful. I haven’t had this mare very long, but we have gotten along well together.”