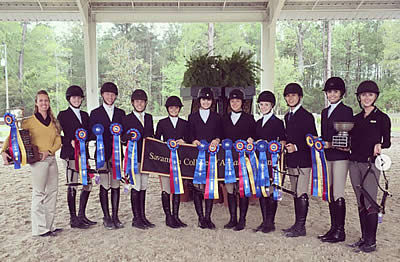 Savannah College of Art & Design earned the Zone 5 championship and the trip to Harrisburg for the Nationals. Photo courtesy of SCAD.

From each Zone Finals, the top two teams and the top two individual riders from each division all qualified to compete at the highlight of the IHSA season. The National Championship crowns the team, individual and alumni champions in both hunter seat and Western. The event also features the coveted USEF/Cacchione Cup and the AQHA Western High Point Rider national final.

“It is a huge team effort and I am so grateful to the staff, the facility and the horses,” said Ashley Henry, head coach of the SCAD Equestrian Team. We had our big team meeting at 5:30 a.m. and I told them, ‘Yes, SCAD Equestrian has a legacy, but every year, it’s a whole new dance. It’s like the first time all over again.’ We’ve always approached it that way.”

Henry said that the team will go back to the basics to prepare for Nationals. They will go on the lunge, train over single jumps and serpentine loops. They will practice on landing the lead.

“It’s the fundamentals of riding that are going to help in the ring when you’re given a challenge,” she said. “We still have a long road ahead, even though we’re Pennsylvania-bound. The game only gets harder now.”

CENTENARY UNIVERSITY TOPS ZONE 3
Centenary University aced their Zone Finals hosted at their equestrian center. The 2017 National reserve team champions led by coaches Michael Dowling and Heather Clark are consistently at the top of the IHSA results. They have many Cacchione Cup wins to their credit, including Katherine Steiner in 2017. Penn State University’s Equestrian team added to their impressive list of achievements and earned the reserve championship.

Dowling credits the success of the Centenary team to the strength of their program, the support of nine full-time faculty members and the depth and diversity of their horses. Training the team, Clark focuses on fine tuning position and Dowling focuses on effectiveness and the horse’s way of going. Their teaching styles complement each other and play a key role in the team’s success.

Leading up to Nationals they will focus on where they were weak at Zones and do a lot of strengthening and work without stirrups.

“I’m really excited about the group of students that we have this year,” he said. “Every year we become more determined to put on a better show. Harrisburg is about as close to home as we get so we have a lot of volunteers coming. It’s going to be a fun event.”

“We have a group of seniors that have been great team leaders this year,” Brooks said. “They have been hungry for it all year.”

Brooks said that the strategy for competing at Nationals is lots of practice. She wants them to be as strong as possible, while keeping their confidence high and setting them up for success.

“They are losing their stirrups as of this morning,” she said.

ZONE 6 GOES TO UNIVERSITY OF FINDLAY
Two Zone 6 universities well-known for their top-notch programs progressed to the Nationals team competition roster. Guided by coach Alexandra Kemp-Thompson, the University of Findlay hunter seat team prevailed at the Zone 6 Finals. Otterbein University earned the reserve championship, and the two will face the 14 teams all vying for the national championship.

“I was very pleased with my team’s performance at Zone Finals,” Kemp Thompson said. “It had been six years since we had been at Otterbein. All the students took on the challenge of riding completely new horses. I’m very proud of how my students handled themselves both inside and outside the ring all season given the circumstances they had to overcome.”

For Findlay, the 2018 season in their Region was unusual. Their last two home shows of the year were canceled and entries at Findlay’s final away show were cut in half.

“My priorities are rider physical fitness and mental self-confidence,” she said. “We have 150 horses in our barn, so I know I can count on my students to ride whatever is thrown their way at Nationals. There will be no stirrup work and work on endurance. I’m very excited to see this team step up. It should be fun!”

“There has been an exponential increase in the quality of riding from all of the schools in our Zone,” Bartsch said. “It continues to push us to be better, train harder and find nicer horses to bring in. The overall quality of the teams and riders that we were competing against was exceptional. It made it competitive and fun. As a coach, it promotes our whole area to be the best that we can be.”

Stanford has a young roster this year and Bartsch explained that two seniors, Caroline Soane and Celia Lang-Ree, have stepped up to lead the less experienced members of the team. This year will mark the two seniors’ fourth National Championship.

To prepare for Nationals, Bartsch has a diverse pool of coaching talent to call on at the Stanford Red Barn including Guy Thomas and Willow Tree Farm and Cindy Brooks at Northern Run. But Bartsch doesn’t plan on changing up the plan.

“We ride how we ride, we train how we train; we’ll step up and add some practices,” she said. “We’ll continue to do no stirrup and strengthening work, but we’ve been doing that since the start of the year. We’re excited. Harrisburg has been a good venue for us.”

MORE POWERHOUSES HARRISBURG-BOUND
The Mount Holyoke team, led by legendary coach C. J. Law, have been regulars at Nationals and this year is no exception. They won the Zone 1 championship, securing their place in Harrisburg. The Boston University team was named reserve champions.

Coach Cynthia Ford and her Skidmore Thoroughbreds led the Zone 2 field to take the championship. Reserve champions St. Lawrence University will join them at Nationals.

From Zone 7, champions West Texas A & M University and reserve champions Purdue University will join the lineup for the IHSA Nationals team competition, setting the stage for exciting intercollegiate sport. 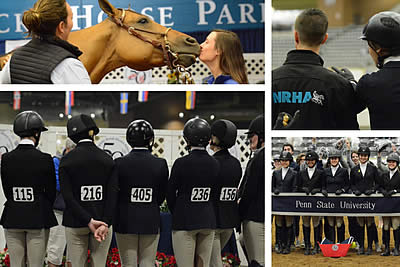 The IHSA announced the 16 national qualifiers for the Teresa L. McDonald IHSA Scholarship Challenge. These students achieved the highest scores from their zones on the online test. They will compete in a practicum phase at the 2018 IHSA National Championship Show in Harrisburg, Pennsylvania, May 3-6.

The test was available online for two weeks on the IHSA website. The participants with the top-two scores from each Zone are invited to compete in a practicum phase at the 2018 IHSA Nationals in Harrisburg, Pennsylvania. The top-10 scorers win scholarships.

Teresa L. McDonald taught at Virginia Tech and was an active IHSA board member for many years. McDonald was a founder of the Intercollegiate Dressage Association. She was known for her sense of diplomacy and nicknamed “Madeline Albright.”

The IHSA was founded in 1967 by Robert Cacchione while he attended Fairleigh Dickinson University in Teaneck, New Jersey. The organization was established so that any full-time college student could participate in equestrian competition regardless of economic status, gender or riding level and offers Hunter Seat and Western competition at eight levels from Walk-Trot through Open divisions for both male and female college athletes. The IHSA emphasizes learning and sportsmanship and fosters teamwork. The organization has grown to include 400 member teams and 10,000 members encompassing 39 Regions, 8 Zones and 45 states and Canada. College or university teams, individuals, alumni and coaches may become members.