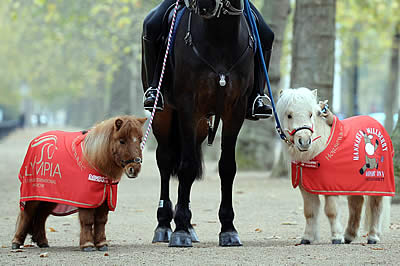 Teddy, who has over 55,000 Instagram followers, and Doris are the mascots for Hannah’s Willberry Wonder Pony, the official charity of Olympia Horse Show 2017. The adorable duo recently visited London to suss out the city ahead of the Show, and even went out on patrol with the Mounted Branch of the Metropolitan Police. The pair’s London adventure with Willberry gripped the hearts of the nation and they appeared in the likes of the London Evening Standard and on BBC News.

The fury friends, who are proving size doesn’t matter, will be onsite for a ‘meet and greet’ as part of the Olympia Live Zone experience, meeting fans during the mornings and afternoons of Thursday 14, Friday 15 and Saturday 16 December.

Hannah’s Willberry Wonder Pony was set up by the late Hannah Francis, a successful young event rider, when diagnosed with a rare bone cancer; the charity aims to support vital research into osteosarcoma, together with granting Willberry’s Wishes to seriously ill people with the aim of enriching their lives through equestrian experiences. Hannah was so touched by the generosity of many in the equestrian world who allowed her to do likewise and was determined to be able to do the same for others.

Alice Goring, the charity’s scientific advisor and owner of Teddy, said: ‘We are so excited to be heading to Olympia Horse Show with Teddy and Doris, particularly as Doris was Hannah’s own pony, making the whole experience even more special. It is a fantastic opportunity for them to meet their fans, and spread the word about Hannah’s Willberry Wonder Pony Charity and all the incredible work they do.’

The Olympia Live Zone will also be welcoming the likes of: renowned BBC presenter Clare Balding, many of the world’s best riders who will be available for signings, and a host of exciting talks ranging from how to get into the Shetland Pony Grand National, to the Mounted Branch of the Metropolitan Police who will be discussing their Activity Ride and opportunities in the forces.

To find out more about Olympia Horse Show and how to get tickets, visit www.olympiahorseshow.com.