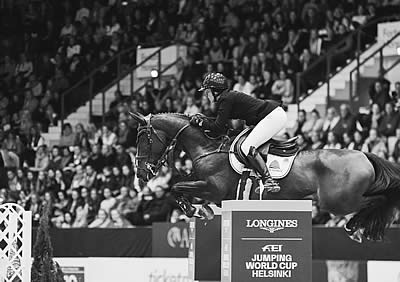 Lausanne (SUI), 7 November 2018 – From supporting the use of horse manure to generate electricity to implementing equestrian-specific reporting indexes and creating a comprehensive guide book for event organisers across the world, the FEI is leading the way in ensuring sustainability is at the heart of its sport.

On the day the International Federation (IF) Sustainability Forum was held in Lausanne (SUI), the FEI was already working behind the scenes on sustainability initiatives, including its adoption earlier this year of the Global Reporting Initiative (GRI), and is now well on the way to adapting each of the GRI indicators to fit the unique world of equestrian sport.

Crucially, this will allow equestrian event organisers across the globe to effectively implement and measure the impact of their sustainability initiatives. And sustainability has been a part of the equestrian sport’s landscape for some time.

The organising committee for last month’s Helsinki International Horse Show (HIHS) has already put in place a wide range of sustainability initiatives. Feedback from the show is currently being incorporated into an updated version of the FEI’s flagship Sustainability Handbook.

This 36-page guide, originally published in 2014 and now being updated in line with the GRI, serves to aid and encourage event organisers to implement sustainability initiatives that will create positive social and economic legacies while reducing negative environmental impacts.

The HIHS itself is a great example of the innovation and application being displayed by organisers of equestrian events across the world.

The 2018 edition of the show didn’t just generate enough sustainable energy to power its own event, it managed to produce a surplus of 36 MWh – enough energy to propel an electric car 288,000km or heat 36 Finnish apartments for a month.

And it all came from horse manure!

Finnish company Fortum HorsePower – partner of the HIHS since 2015 – provided almost 600 bales of shavings to ensure comfy bedding for all 235 horses competing at this year’s show. In return, the animals produced 112 tons of manure, which was gleefully transformed into 168MWh of energy at local plant, Fortum Jarvenpaa.

While it’s a clear win-win for all concerned, energy production was far from the whole story at the HIHS in 2018. In fact, everywhere you looked, green initiatives were taking hold.

As part of the event-wide ‘HIHS Jumps Green’ project, the organising committee reduced overall paper usage by an impressive 64%, employed electric and bicycle-powered transport wherever possible, significantly increased recycling and reuse efforts across the venue and massively reduced food waste and single-use plastics.

Equestrian sport fans – and there were more than 50,000 of them across the five-day event – got involved too, posting their best environmentally-friendly initiatives on the event’s social media platforms. One lucky participant even received free tickets for the 2019 show in return.

And visitors to the show in 2019 will be greeted by even more green initiatives, with the organising committee having already revealed its intention to introduce a Green Partner project with Fortum.

These are just the kind of efforts the FEI happily promotes but, like all good leaders, the governing body knows the hard work must start at home. So the FEI’s headquarters in the Olympic Capital of Lausanne (SUI) have become the centre of a Green Office project.

Although the HQ of horse sport is already a Minergie certified building – a Swiss standard indicating low energy use – the FEI is asking more of itself. Following an external audit, employees from top to bottom are reducing the organisation and building’s environmental impact still further by such actions as eliminating disposable cutlery and cups, improving recycling efforts through increased segregation and avoiding waste types by eliminating their sources.