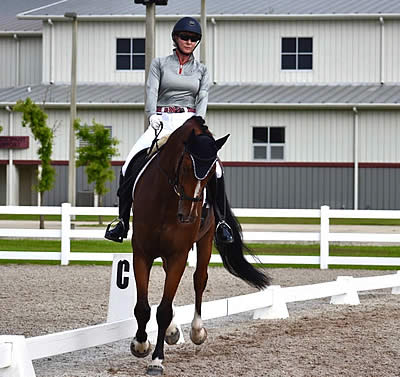 Jacksonville, FL (July 3, 2018) – With top tier arenas, an indoor coliseum like no other in the area and over 400 permanent stalls, the Jacksonville Equestrian Center provides everything a dressage rider needs to enjoy competing with their equine partner. First Coast Classic Dressage landed at the Jacksonville facility to learn and improve their dressage knowledge when First Coast Classical Dressage hosted a “Showposium” with FEI 4* judge William ‘Lee’ Tubman.

The unique event featured lessons, classes with feedback sessions and a lecture.  Heather Rodney the show manager said, “It was a treat to have an FEI 4* judge for the weekend. In addition, an FSU production student who is making a video piece about First Coast Classical Dressage Society attended and captured footage for the video.”

The “Showposium” is focused on educating and promoting horse/rider progression in their training and knowledge base. In addition to their packed schedule First Coast also added a new class opportunity at the “Showposium” allowing riders to bring a video of a test they have ridden previously and the corresponding score sheet to be reviewed by the judge in attendance. The recent “Showposium” offered riders an extraordinary opportunity to have an FEI 4* judge of Mr. Tubman’s caliber review their tape and test and offer a judges’ perspective on how to make improvements.

Lisa Beardsley, Vice President of the First Coast Classical Dressage Society, said, “We have been having shows at the Jacksonville Equestrian Center since 2014. Our first year, we held 3 shows.  Since then, we have put on 5 shows a year; all but one have been held at the Equestrian Center.”

The staff at the equestrian center also greatly enjoys hosting First Coast Classical Dressage events. “First Coast Dressage is always a pleasure to have at the Equestrian Center. We look forward to having them back for another rated show in September,” said Alexis Newman, Business Development Manager at Jacksonville Equestrian Center.