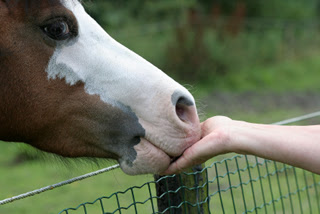 I was watching someone work with a frightened young pony today. The pony had never been handled before and was terrified. The person was using a clicker and treats to help him get over his fear, and was teaching him how to think before he reacted out of his natural fight or flight instincts. The scared little pony learned fast and made a great deal of progress in just one day! The trainer was training the pony how to learn and helped build his desire to be with people.

Jane’s friend, Shawna Karrasch, teaches how to do this with her clicker training programs (www.On-Target-Training.com). She learned this method at Sea World in San Diego while training seals and killer whales (also known as Orcas). When Shawna got into horses, people told her clicker training wouldn’t work with her equine friends because we’re not “food oriented.” Shawna not only proved them wrong, she created a whole industry around horse clicker training! She found that we horses are actually much easier to clicker train than the wild sea creatures she was used to. Her work has made a huge difference for many people, dogs, and horses. It’s a good thing she didn’t listen to the neigh-sayers (lol), or Jane might never have learned this terrific way to communicate with her four-legged friends!

Jane made a decision long ago to always keep an open mind. While she has decades of horse experience and is viewed as an accomplished trainer and rider, it’s her continual desire to learn that’s helped her stay at the top of her game. She expects the same from me. Even though we’ve reached Grand Prix in our dressage training, there’s still a lot I can improve on and learn.

How about you? Are you still a student? What would you like to learn today? Grab a book or a DVD, and feed your mind today. It’s as important as feeding your body.