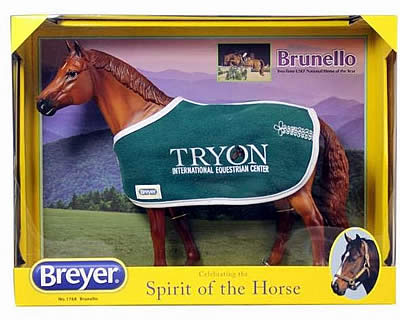 Pequannock, NJ – April 23, 2016 – In the horse show world, the super stars of the sport tend to be jumpers or dressage horses. So it may come as a surprise to learn that the horse with the biggest fan club is super hunter Brunello!  As with many things, Brunello is simply exceptional. The 18-year-old Hanoverian owned by Janet Peterson and Liza Towell Boyd claimed his third consecutive victory in the USHJA International Hunter Derby Championship in 2015 and was named the USEF National Horse of the Year, for the second time, as well as Show Hunter of the Year by The Chronicle of the Horse. Rider Liza Boyd claimed the USEF Emerson Burr Trophy for the third time as well, thanks to Brunello. And so it is only fitting that Brunello takes his place among the pantheon of horses that have graced Breyer’s stable of horse heroes!

Breyer is pleased to announce that it will introduce its new Brunello portrait model this summer, in partnership with Tryon International Equestrian Center (TIEC), on June 10th, as a highlight of the Tryon Spring 8 FEI CSI 5* (June 8-12). Breyer Brunello models will be available for purchase at Tryon Tack beginning Friday, June 10th. Only 400 models will be available for the launch and each model will come with a special mini Breyer TIEC blanket only available at this show, while supplies last. Purchases limited to 2 models per person.

The weekend will kick off with a special presentation of the first Brunello portrait models to be created for Brunello’s owners Janet Peterson and Liza Boyd, and longtime groom Alberto Ramirez, on Friday evening, June 10th, during the Hunter Derby under the lights in the George Morris Arena at TIEC. Boyd and Brunello are preparing to compete in the Hunter Derby, offering fans and spectators a chance to see this historic pair live in competition.

Liza Boyd will be available for autographs (limited to 200) from 4:00-5:00 P.M. and Brunello will make an appearance at 5:00 P.M. as well for photographs. When asked what makes Brunello so special, Liza Boyd said, “Brunello: B: Brave to gallop under the lights; R: Rideable, to turn oh-so-tight; U: Unique, not your typical hunter type; N: Naughty, in his stall he will bite; E: Ego, he thinks he’s always right; L: Longevity, at 18 he’s still jumping with height; L: Lexington, three times he has had a magical derby night; O: Owl, for his wisdom and insight.”

Tryon International Equestrian Center is a state of the art equestrian facility located in Mill Spring, North Carolina. The venue offers competitors access to an array of equestrian sports including hunter/jumper, dressage, and eventing competitions throughout the year. The facility, which officially opened in 2014, began its inaugural year for FEI competition in 2015. This year, TIEC is set to host two CSI 5* competitions, as well as the prestigious Nutrena® USEA American Eventing Championships in early September, as well as two FEI CDI 3* competitions for dressage riders. TIEC is conveniently located just 45 minutes from Asheville, NC, and an hour from Charlotte, NC, in the rolling hills of the Blue Ridge Mountains.

Tryon Riding and Hunt Club (TRHC), an important supporter of the equestrian community in the Western Carolinas, sparked the discussion regarding the creation of a Brunello Breyer model, as co-owner Janet Peterson is a longtime member of the organization. A social media campaign initiated by TRHC, has been tremendously influential in recognizing and honoring the remarkable career accolades of Boyd and Brunello.

“Having a Breyer model of Brunello to celebrate his accomplishments is something very special. He is a wonderful horse and is incredibly well loved by all of those involved with him, including myself, Liza Boyd, and her father Jack Towell,” said Peterson. “I’m very much looking forward to this replica of him, as well as the ceremony that is planned for June 10th. He has a large fan base and following in the Carolinas and I hope that everyone will join us for the festivities to honor his achievements.”

For those who can’t be at TIEC for the presentation, Breyer and TIEC will host an online sweepstakes offering six (6) Brunello models with TIEC model blankets signed by Liza Boyd via the Tryon International Equestrian Center (TIEC) and Breyer Facebook pages. Stay tuned for more information.

Spectators are welcome to attend the Tryon Spring 8 FEI CSI 5* at the Tryon International Equestrian Center free of charge. Breyer activities are also free of charge (while supplies last). The Breyer Brunello model debut is limited to 400 models at this show and will be sold on a first come, first served basis at Tryon Tack along with a mini Breyer TIEC model blanket as a special souvenir of the weekend. The standard Breyer Brunello model will be available nationwide in July 2016. TIEC is located at 4066 Pea Ridge Rd. in Mill Spring, NC. For more information, please visit TIEC at www.tryon.com or Breyer at www.breyerhorses.com.

Breyer Animal Creations is a division of Reeves International (www.reevesintl.com), a family-owned, NJ-based toy manufacturer and distributor. Founded in 1950, Breyer celebrates the horse and other animals, dedicating itself to the creation of authentic and realistic model horses for play and collecting. Breyer is one of America’s most iconic toy brands and its ‘portrait’ models of horse heroes and animals like Secretariat, Valegro, Big Chex to Cash, Black Beauty, The Black Stallion, RinTinTin and Lassie have inspired children of all ages to love animals. Breyer’s partnerships with publishers like Scholastic and Macmillan Children’s Publishing and studios like Universal (Seabiscuit), DreamWorks (Spirit: Stallion of the Cimarron and Dreamer), and Touchstone Pictures (Hidalgo) have provided a base from which to create new content and play forms for children inspiring a world of imagination and creativity. Visit us at www.breyerhorses.com or call 800-413-3348 to learn more about the model horse hobby and Breyer Animal Creations. 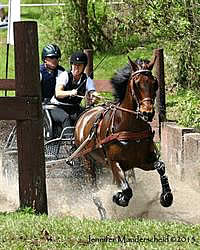 Lexington, Ky. – On a night dedicated to the horse, two special athletes were recognized for their excellence in 2015 during the USEF’s Year-End Awards Gala. In a year that witnessed equestrian athletes excel, PVF Peace of Mind and Brunello reached the pinnacle of their sports and for their achievements were named International and National Horse of the Year, respectively. Voting was open to the public through January and both horses, already fan favorites, were rewarded for their tremendous results throughout 2015 with support from voters.

PVF Peace of Mind, the charismatic eight-year-old Morgan mare, reached unbelievable heights in 2015 and has proven to be unbeatable with owner Suzy Stafford. In the carriage, in an astonishing feat of competitive excellence, “Hunny” won in each of her three FEI combined driving events this year, including the CAI2* Hermitage Classic in Goshen, Ky., the prestigious CAI2* Kentucky Classic in Lexington, Ky., and a second consecutive win at the CAI2* Live Oak International in Ocala, Fla. Most importantly, Hunny’s dominating performance in all three phases of competition at Hermitage earned her and Stafford the 2015 USEF Single Horse Driving National Championship by an incredible 14-point margin over their closest rival. Hunny has been undefeated in the dressage arena this year with Stafford. Demonstrating her versatility under saddle, Hunny was undefeated at First Level ridden dressage and crowned First Level Show Champion at the popular Massachusetts Morgan Horse Show this summer.

Janet Peterson and Liza Boyd’s Brunello has been turning heads in the hunter ring with his signature style and consistent top placings for years. With Boyd in the tack, the pair has been a fixture in International Hunter Derby competitions since the program’s inception and scored their biggest victory in August when they won their third consecutive USHJA International Hunter Derby Championship in Lexington, Ky. The pair won both the Classic Hunter Round and the Section A Handy Hunter Round on their way to securing this unprecedented victory.