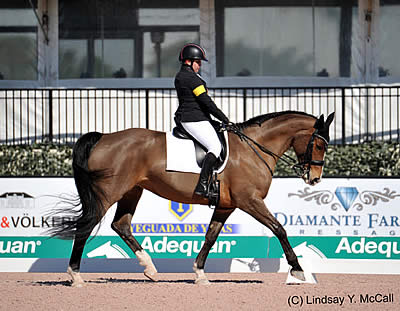 Grass Lake, Michigan – June 4, 2016 – Young rider Sydney Collier of Ann Arbor, Mich. posted a 73.678% in Grade Ib FEI Individual Test on Saturday, June 4, in the 2016 USEF Para-Equestrian Dressage National Championships Sponsored by Deloitte and Selection Event for the Rio 2016 Paralympic Games. Collier led the field with Western Rose, owned by Wes Dunham, in the High Performance National Championships. Grade Ia rider Roxanne Trunnell and Julia Handt’s Royal Dancer earned a 72.754% to maintain an overall lead over the two days of competition. In the National division, Pam Hardin (Grade III) and Quaterjack garnered the first place overall. The Waterloo Hunt Club show grounds in Grass Lake, Mich. has been the stage of excitement as riders and horses in Grade Ia, Ib, II, III, and IV give it their all as they aim for top positions in the National Championship with High Performance and National Divisions and the Paralympic Selection Trials. Each horse and rider combination will have one final chance on Sunday, June 5, in the FEI Freestyle competition to present their best tests for ground jury members Kristi Wysocki 4* (USA); Kathy Amos-Jacob 5* (FRA); and Carlos Lopes 5* (POR). After the Freestyle competition spectators will know the national champions from each division. The short list for the U.S. Paralympic Dressage Team representing the United States at the 2016 Rio Paralympic Games will be announced at a later date by USEF. The Games are scheduled for September 11-16, 2016, at the Olympic Equestrian Centre in the Deodoro Olympic Park, Rio de Janeiro, Brazil.

Contenders Collier and Trunnell are both aiming for a spot on the U.S. Paralympic Dressage Team. Collier is riding both qualified horses Western Rose and Wentworth in Grade Ib. “It’s incredible to be back in my home state and showing at a venue where I used to ride when I was first starting to ride para-dressage in 2010,” explained Collier. “It really feels like everything is coming full circle. It’s such an honor to be in contention for a possible spot on the U.S. Para-Dressage Team headed to Rio and to be showing alongside so many talented athletes. I am very proud of Wentworth and Western Rose. They have both looked and felt wonderful since we arrived in Michigan and really stepped up to everything we have asked of them in the training and show ring. I feel so lucky to have the privilege to ride and create such special bonds with both of them. I am so thankful to my trainer Wes Dunham, all my sponsors, as well as my amazing friends and family for their support along this journey. I couldn’t do any of this without each and every one of them. A huge thank you also to show management and Deloitte for organizing and sponsoring such a wonderful event as we pick a strong team to represent our country in Rio, but also grow and develop the sport of Para Dressage in the USA.”

Roxanne Trunnell noted, “Royal was a superstar again today. Despite having little connection inconstancies during the individual championship test we still pranced to the same exact score that we received yesterday (72.758%) and placed first in the class again. I’ve been working really hard on improving the freewalk at home and even though there are still improvements to be made, the overall movement is better. I would like to thank my trainer Kai Handt for taking the time out of his schedule to help train Royal and me. I would also like to thank the owners of the Waterloo Hunt Club for opening their facility up to the 2016 USEF Para-Equestrian Dressage National Championships and Selection Event for the Rio 2016 Paralympic Games. There were golf carts provided to the para-dressage athletes so that they could get from the stable area to the arenas quickly. The arenas themselves were very well cared for and the staff was efficient in changing the long dressage court to the short dressage court very quickly. I’m not sure but I think this is the first time the Waterloo Hunt Club has opened its show grounds to Para-Equestrians and it ran quite smoothly for the first time this was done. Tomorrow is the freestyles and I’m very excited because we have totally changed the freestyle chorography and music since the 2016 Florida CPEDIs. I find the freestyle extremely fun especially since I came up with the music on my own, so it will be exciting to see what the amazing ground jury we are able to show under this year will think of it.”

The overall National Champions in each division will be determined by weighting the tests with the Team Test counting for 40%, Individual Test 40%, and Freestyle Test 20%. U.S. Paralympic Dressage Team selection rankings will be based on 50% of a combination’s overall performance in the Selection Event and 50% on the combined overall score from its best two CPEDI3* events taking place January 1, 2015 – May 16, 2016. The selection procedures also include discretionary criteria. All nominations to the 2016 U.S. Paralympic Dressage Team are subject to approval by the United States Olympic Committee and the USEF. The short list/FEI Nominated Entry for the U.S. Paralympic Dressage Team will be forwarded to the FEI by the United States Equestrian Federation by June 20, 2016. Equestrian competition at the 2016 Rio Paralympic Games is scheduled for September 11-16, 2016, at the Olympic Equestrian Centre in the Deodoro Olympic Park, Rio de Janeiro, Brazil.