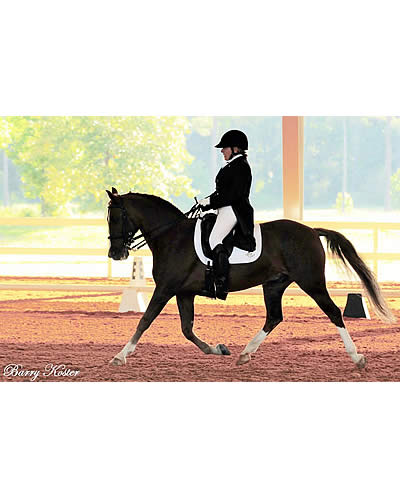 It is tough to be a champion in any FEI discipline. But what does it take to excel at two? Shelly Temple, with her 17 year old Morgan gelding LR Ami B-Line (“Cooper”), recently earned the US Dressage Federations silver medal. Shelly has concentrated on ridden dressage with Cooper since his informal retirement from the sport of combined driving in 2013. Shelly and Cooper finalized the silver medal in September at the Pumpkin Patch Dressage Show in Camden, South Carolina with coach Amy McElroy.

Although Shelly was a former dressage rider during her equestrian career, Cooper was primarily a combined driving pony. Their partnership resulted in Shelly and Cooper being crowned US National Champion Single Pony in 2006, 2010 and 2011 as well as members of the US Pony Driving team in 2007 and 2011. In the World Championships, Shelly and Cooper won silver and bronze medals in driven dressage as well as two Bronze Team medals.

Shelly’s next goal is earning her USDF gold medal with her longtime partner, Cooper.

Catalyst Driving Center is an equestrian driving facility in Windsor, South Carolina specializing in the training of all levels of drivers and horses. Please feel free to contact Shelly to learn more about her, the products she trusts, her horses, and what Catalyst Driving can offer the driving enthusiast.