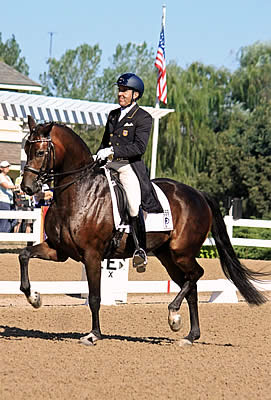 Whitehouse Station, NJ (July 20, 2016) – The team at Piaffe Performance Farm, led by farm owner Dr. Cesar Parra, has been busy so far this summer developing exceptional young horses up the levels. Piaffe Performance Farm is gearing up to return to the 2016 Markel/USEF Young and Developing Horse Dressage National Championships at the Lamplight Equestrian Center in Wayne, Illinois, on August 24-28, for which the team has already qualified two horses with a number of high scores at competitions throughout this past year.

Cesar Parra, an Olympian and U.S. Pan American Games Dressage Team Gold Medalist, will campaign Fashion Designer OLD in the Developing Prix St. Georges division and Don Cesar in the Six Year Old division at the Markel/USEF Young and Developing Horse Dressage National Championships at Lamplight. Having meticulously developed the two Young Horse Championship contenders from the very beginning, Parra is extremely proud of how far they have come.

Fashion Designer OLD, an eight-year-old Oldenburg gelding (Faustinus x De Niro) owned by Martin Sosnoff, enjoyed a top finish in the 2015 Developing Prix St. Georges at Lamplight. This year, Parra has been campaigning Fashion Designer OLD with consistent scores over 70 percent in the same division throughout the 2016 winter season. The pair most recently topped the Prix St Georges class at the Centerline Events Spring Dressage Show at HITS in Saugerties, New York. They will compete once more before Lamplight at the Windy Hollow Hunt Sussex Dressage Show in Augusta, New Jersey on July 22-24. Parra said, “Fashion Designer is such an outstanding horse. He typifies what a developing horse should be with his amazing gaits and willing attitude. He is the kind of horse that any trainer would love to have in their barn, and I am grateful to Martin (Sosnoff) that Fashion Designer is here with us.”

Parra has also been preparing Don Cesar, a Westphalian gelding (Desperados x Sacre Schwalbe, Manhattan) with impressive performances and high scores in the Six Year Old division this year. Don Cesar will also compete at the Windy Hollow Hunt Sussex Dressage show in preparation for his Lamplight Six Year Old debut. “Everyone teases me that I favor Don Cesar because we share the same name, but really he is just so very talented. He always tries so hard and is such a pleasure to ride,” Parra complimented.

Amidst the excitement of preparing for the Markel/USEF Young and Developing Horse Dressage National Championships, Piaffe Performance is also excited to announce the re-launch and expansion of their social media accounts on Facebook, Instagram, and Twitter. Included in this revamp is a new weekly feature called “Cesar Parra Recommends,” or CPR, which provides a unique experience to learn from experienced trainer Parra himself. Through CPR, followers can find useful horsemanship tips, expert training tips, and top recommended products. Equestrians are encouraged to submit their own questions that could be answered and shared in the CPR section. Piaffe Performance also encourages users to tune into “Freestyle Friday” weekly posts for a fun weekend dose of musical dressage.