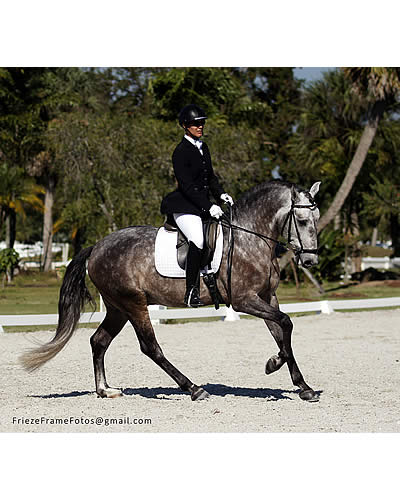 Forcado da Carvalha is a 5-year-old stallion bred in Portugal by Quinta da Carvalha and imported in 2013 (Qualificado – Infanta, Cravo). He was the IALHA National Champion of Lusitanos Three and Under, has shown to First Level and is schooling Second and Third Level movements. (Photo by Shaana Risley)

Wellington, FL (August 28, 2015) — Lusitano horses may well be considered the crusaders of the horse world. The Baroque breed known for bravery, strength, beauty and intelligence has rapidly converted a cadre of aficionados from a variety of disciplines to Lusitano lovers. The horse originating from Portugal has evangelized around the world and amassed a growing fan club. Across the globe, Lusitanos are rapidly gaining in popularity, especially in the sport of dressage.

High-performance dressage rider Carmen Elisa Franco, a Colombian transplant now based in South Florida, has been in the horse business for more than 25 years. After leaving Colombia, she trained in Germany, where she earned the Bereiter title in Warendorf. She’s ridden horses of all breeds including Warmbloods, Arabians and Thoroughbreds, but after getting to know Lusitanos in 2005, Franco is a full-fledged fan of the breed. She is now a dressage trainer for Haras dos Cavaleiros, a respected breeder of the Lusitano horse in the U.S.

“I was lucky enough to get involved with this breed a few years ago, and I have ridden both Portuguese and Brazilian lines,” she said. “It amazes me that all of them, no matter their age or training stage, are very kind and fun. They are suitable for amateurs because of that, and now we are seeing great sport horses that can go all the way to the top. Any professional would love to have one too.”

Franco began working with Haras dos Cavaleiros in 2013 when they imported a group of Lusitano stallions to the U.S. and owners Rafael Chavez and Carmina Zamorano asked her to look after the horses at the quarantine facility in Wellington, Florida. She later traveled to the breeder’s Texas location outside Houston in Magnolia to conduct clinics where Forcado da Carvalha, a Lusitano stallion imported from Portugal, and Donatello DC captured her attention and her heart. Chavez and Zamorano asked her to continue training the horses in dressage as well as compete.

“Working with Haras dos Cavaleiros’ horses has been a very rewarding experience,” Franco said. “Rafael and Carmina are very realistic about their horses and the program for each one of them. There is a lot of respect toward my decisions and total support for me as a person and as a professional. And one of the best things of working with them is the great team: the Haras Family.”

Chavez said the choice to have Franco train and compete his Lusitanos was a natural one.

“Wellington is a window for our horses,” he said. “It is where the sport of dressage is being done at the highest levels and we wanted to expose our horses to that.”

Franco travels to their operation in Magnolia at least twice a year to conduct dressage clinics for all levels of riders, where she teaches theory sessions as well as mounted lessons to the Lusitano faithful in Texas. Franco has clinics scheduled for September and November.

“The clinics have been always open to all breeds of horses but the Lusitanos are the most popular,” she said. “We have had horses and riders from beginners to experienced and it’s really fun to witness their progress. At the end, we all share the love of what we do and the horses that are so willing to let us work with them.”

Haras dos Cavaleiros operates Lusitano breeding farms in both Mexico and Texas, Lusitanos were originally bred for bullfighting and warfare, but now Chavez and Zamorano breed for a variety of disciplines including dressage and Working Equitation, a sport relatively new to the United States. Working Equitation is a discipline of versatility encompassing dressage, ease of handling, speed and cattle work, very much like the work of cowboys of the American West. Haras dos Cavaleiros’ commitment to the sport runs deep and they will again host the Haras Cup, the most important Working Equitation competition in the United States, Oct. 23-25. The Haras Cup draws competitors from the U.S. as well as international devotees of the sport.

“Haras’ focus is on developing versatile horses: the ones suitable for hobby or for competition,” Franco said. “We love to breed, to train and to show them. We keep some of the horses we breed and/or buy to bring them to the top of their abilities. Of course, sales of horses are one of our goals, but we like to sell them in the correct training stage and to the suitable client.”