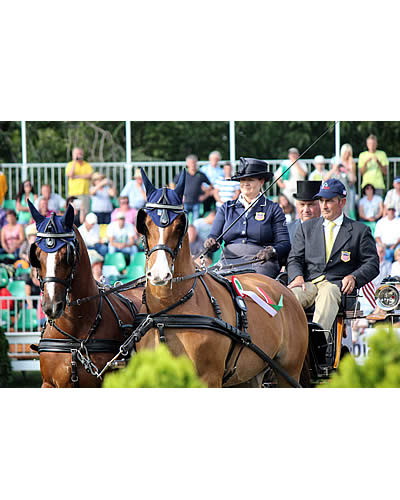 Fábiánsebestyén, Hungary – Kathrin Dancer drove accurately through the cones to finish fifth in the final phase of the 2015 FEI World Driving Championships for Pairs today with a time of 3:07.37. She led the U.S. team, consisting of Jacob Arnold and Scott Dancer, throughout the entire competition and concludes these championships with an 18th-place finish. The U.S. finished ninth overall with a score of 391.6.

“This was such a great experience. It was such an awesome team with our coaches, Michael Freund, and Thorsten Zarembowicz. Everyone who was here supporting us was amazing; it was just a relaxing environment. The rest of the nations saw that the U.S. is a contender. Our horses are only going to get better from here. These championships came a year too soon as we haven’t hit our prime. We got our foot in the door and are already thinking about the next championships and getting on the podium,” said Kathrin Dancer.

Kathrin Dancer (Woodside, Calif.) came into the cones competition with a two-day score of 190.21. She and her own and Scott Dancer’s Wimbledon and Redford moved through the cones with good finesse and kept all the balls in place, only one of five teams to do so. However, she picked up 3.69 in time penalties, which gave her a three-day score of 193.90.

“After walking the course, I knew what the trouble spots were going to be. Jacob and Scott gave me some pointers having gone before me. Going in, everything just vanished; I had nothing to lose and everything to gain. My horses are like a Labrador with a ball; they love the cones,” added Kathrin Dancer.

She began these world championships strong with a nice dressage test on Friday for a score of 60.05. This put her in 28th place after the first day. She struggled a bit during Saturday’s marathon phase after getting off to a slow start during the first four obstacles for a score of 130.16. This moved her to 29th overall.

Arnold (Snow Camp, N.C.) entered the cones competition after driving a good marathon on Saturday. However, it was not the same ending today. He and Lajos Móró’s Dax 62 and Marco Freund’s Janni 12, moved through the cones smoothly until near the end of the course. They picked up six penalty points for knocking down balls at obstacles 16 and 18 and 2.48 in time penalties for a total of 8.48 in penalties. The team finished 15th in the cones and 31st overall with a score of 201.97. A rough dressage test put them in 45th place after the first day of competition with a score of 66.49. He moved to 39th overall, with a score of 193.49, after posting a score of 127 in the marathon.

Scott Dancer (Woodside, Calif.) did not have his best days in these championships. He sat in 40th place, with a score of 195.62, coming into the cones. He and Wayne Van Niekirk’s Carumbus and Jan Greve’s Dapper moved through the cones well until they entered obstacle 11. A ball came off one cone, and the team proceeded to obstacle 12 where another came off. They also had a ball fall at 16 for a total of nine cone penalties. They added 6.82 in time penalties for a total of 15.82 penalties. He finished the cones in 44th place and placed 43rd overall with a score of 211.44. He earned a score of 62.24 in dressage, which put him in 35th place after the first phase and a score of 133.38 in the marathon.