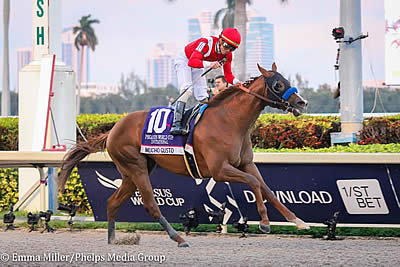 Hallandale Beach, Fla. – Jan. 28, 2020 – The 4th annual running of the $3 Million Pegasus World Cup Invitational was highlighted by standout performances from American Equus sponsored jockeys this weekend. Some of the best upcoming thoroughbreds in the sport came out to Gulfstream Park to vie for the Pegasus Cup trophy, and jockey Irad Ortiz Jr. piloted several horses to top finishes, including Mucho Gusto in the highly anticipated Pegasus World Cup Invitational.

Mucho Gusto, owned by Michael Petersen and trained by Bob Baffert, had many eyes on him when race day arrived, with his top contender being Higher Power ridden by Flavien Prat. Mucho Gusto’s odds increased to 9-2 and Higher Power’s increased to 6-1 after the previous favorites, Hall of Fame Jockey Mike Smith’s mount Omaha Beach and Spun to Run, Javier Castellano’s mount, scratched from the race prior to Saturday. With a standout team behind him, Mucho Gusto crossed the finish line in the Grade 1 race clean after establishing an early lead in the field of ten horses with Ortiz Jr. in the irons.

“I had a great trip,” Ortiz Jr. said. “He got a great start and felt good. He relaxed so well and we were able to save ground. At the three-eighths pole I tipped him out and he took off. He was much the best. I think he just took off and opened up easy. He’s a nice horse.”

Mucho Gusto’s Hall of Fame trainer Bob Baffert has a long history of success in the racing world, having won the inaugural Pegasus Cup four years ago with Arrogate and two Triple Crowns with American Pharaoh and Justify. He was thrilled to add another high profile win to his resume with the talented team of Mucho Gusto and Ortiz Jr.

“He looked great in the warm-up,” Baffert explained. “Irad Ortiz did a pretty masterful job – he has a lot of speed but the key was to get a good break and get over right away. And I just left it up to [Irad]; just keep him in the clear. When he was down inside, I thought, ‘I hope he knows what he’s doing,’ but he did. He knows that track really well. It was a great performance by him and the horse.”

Luis Saez finished third in the race on Mr. Freeze, owned by Jim Bakke and Gerald Isbister and trained by Dale Romans.

Earlier in the day, Ortiz Jr. rode Phat Man to the win in the $150k Fred W. Hooper One Mile, the horse’s first graded-stakes (G3) at Gulfstream Park.

“The race set up for him,” Ortiz Jr. said about Phat Man. We knew there was going to be a strong pace, we wanted him to be forwardly placed, but at the same time relaxed. He was there when I asked him. He ran a good race.”

“The horse broke well and the speed set up in front of us,” Gaffalione said. “I was able to let my horse settle. They just kept opening up and I didn’t see any reason to go around them, so we just stayed on the fence, and he really exploded down in there and finished the job. He honestly got more competitive down in there.”

It was truly a day of domination for American Equus jockeys at Gulfstream Park, with Saez winning the 1 Mile Fillies race on Silver Kitten, the $200k Turf Fillies race on Mean Mary, and taking second in the Three-Year-Old Maiden race with Gimme Some Mo. In the $150k Turf Fillies race, Ortiz Jr. took the victory on Jean Elizabeth, while Jose Ortiz and Girls Know Best finished close behind in second. The $150k Fillies saw Castellano cross the finish first with Atomic Blonde, while Ortiz and Mitchell Road took second and Gaffalione and La Feve took third. Ortiz and Pink Sands were also victorious in the $200k Fillies race.