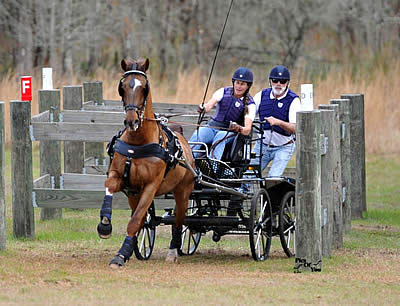 Lexington, Ky. – The top drivers in the country kicked off the 2016 season this weekend at the Little Everglades CDE in Dade City, Fla. The CAI2* divisions served as Selection Trials for Four-in-Hand and Single Horse drivers aiming for the 2016 FEI World Driving Championships. Nifty Hamilton climbed the leaderboard to win the CAI2*-H1 division, while Chester Weber led from start to finish to win the CAI2*-H4 division.

Hamilton (Alva, Fla.) had a solid dressage test with Makari Design in the horse’s FEI debut, receiving a score of 59.47 to put her in fifth place. She and the 2008 KWPN gelding, owned by her and Milton Hamilton, won the marathon phase with a fantastic performance, adding 76.76 penalties to their score to move in to second place on the leaderboard. Another winning performance in the cones phase with just 1.33 time penalties clinched the CAI2*-H1 win for Hamilton on a final score of 137.56.

“We are really, really proud of him; we have been taking the time to bring him up through levels,” Hamilton said. “For dressage, the weather was terrible and ring was very soggy, but we got through. The marathon was really smooth and flowing, and the hazards were terrific. We won the phase, which was surprising, but great. For cones, we ended up winning with just some time. He is a fun horse and tries really hard, so it was a really fun and exciting weekend.”

Sterling Graburn (Paris, Ky.) and Mannkato, his and Laura Corsentino’s 2001 Dutch Harness gelding, finished in second place with a final score of 138.79, while Leslie Berndl (Newcastle, Calif.) and Uminco, her 2001 Royal Dutch Warmblood gelding, were third with a score of 150.24.

Weber (Ocala, Fla.) and his and Jane Clark’s KWPN geldings had a dominating performance in the CAI2*-H4 division, winning all phases of the competition. They delivered their signature expressive test in the dressage phase to receive a score of 43.57. Weber and his team had a strong marathon phase, adding 101.27 penalties to their score. They clinched the win in the cones phase after collecting 4.80 time penalties to finish with a final score of 149.64.

“I was really pleased with the horses,” Weber said. “We had horses that hadn’t competed as a group before for the dressage phase. The weather was unfortunate with torrential downpours, but they did well. Marathon day was beautiful. We added Amadeus, a new horse from the Hungarian team at last year’s European Championship, in the right lead, giving us some added depth for things to come this year. We finished well in the cones phase with some time penalties for a great weekend overall.”