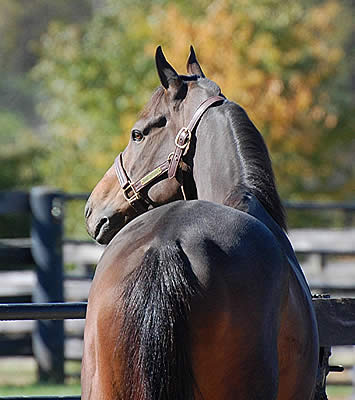 GEORGETOWN, KY – MARCH 2, 2020 — The National Museum of Racing and Hall of Fame announced its nominees for induction in the class of 2020. Old Friends, the Thoroughbred Retirement farm in Georgetown, KY, is proud to announce multiple-graded-stakes winner and racing superstar Game On Dude was among the equine nominees.

The 13-year-old gelded son of Awesome Again – Worldly Pleasure by Devil His Due retired to Old Friends in 2014 following one of the most prestigious campaigns in racing history, and has been a star attraction on the farm, which is open to the public daily.

Game On Dude is turned out with 2012 Breeders’ Cup Turf winner Little Mike in what the farm often refers to as the $10 million paddock.

Campaigned by trainer Bob Baffert and owned by a partnership that includes Joe Torre’s Diamond Pride, the Lanni Family Trust, Mercedes Stable, and Bernie Schiappa, Game On Dude holds the distinction of being the only horse to ever capture three runnings of the Grade 1 Santa Anita Handicap. In his final Big ‘Cap victory, in 2014, he covered the 1-1/4 mile distance in stakes record time of 1:58.17.

In addition, Game On Dude is only the second horse in history to sweep California’s three Grade 1 handicaps — the Santa Anita Handicap, the Hollywood Gold Cup, and the Pacific Classic — in the same year.

In his 34 career starts Game On Dude captured 16 wins, eight of them Grade 1 stakes and 14 graded stakes in all. His career earnings are just under $6.5 million.

“Everyone at Old Friends is thrilled by this well-deserved honor bestowed on the irresistible Dude,” said Old Friends founder and President Michael Blowen. “We think he’s a worthy Hall of Famer and has earned the distinction. Thanks to the Hall of Fame nominating committee for appreciating all that Game On Dude has done for our great sport.”

The 2020 Hall of Fame induction ceremony will be held at the Fasig-Tipton Sales Pavilion in Saratoga Springs, N.Y. on Friday, August 7, at 10:30 am. The event is free and open to the public (seating is limited).