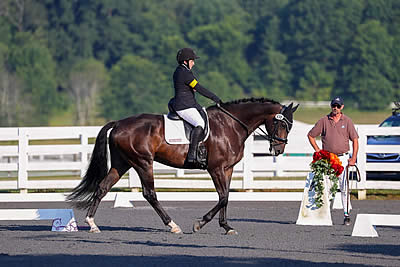 Sydney Collier hopes to qualify for the U.S. Para Dressage team for the 2020 Tokyo Paralympics with All in One. Photo by susanjstickle.com.

New York, NY – July 29, 2019 – Top U.S. show jumper Georgina Bloomberg has been a sponsor of U.S. Paralympic rider Sydney Collier for a year, supporting her in her bid to qualify to represent the United States at the 2020 Tokyo Paralympic Games. In early July, Bloomberg purchased a new horse for Collier to show with that goal in mind, the Hanoverian gelding All in One.

“I can’t say enough great things about [All in One] and how excited I am to be working with him to try and earn a spot on the team for Tokyo 2020 and try to earn the gold there,” said Collier. “We have high hopes for him. It’s like the stars aligned for him to come into my life. I’m over the moon to get into the show ring with him. Georgina was willing to help me find and purchase him, which was such a blessing. Without her, I would not have had the resources to be able to do that myself.”

Bloomberg, one of the top U.S. show jumpers, and Collier have been friends for years. “It’s a pleasure to be able to support someone like Sydney,” said Bloomberg. “I want to see her be able to pursue her dreams. It’s nice to be able to help someone who’s working so hard and wants something so badly and deserves to get somewhere, but just has a financial roadblock preventing her from doing that.”

Collier, 21, rides at the Grade I para-equestrian dressage level, in which the tests are performed at the walk only. She began riding as able-bodied at the age of seven but switched to para-equestrian at age 11 after being diagnosed with the rare Wyburn Mason Syndrome. The congenital birth defect caused tumors and a massive stroke and subsequent brain surgery left her with limited use of the left side of her body, completely blind in her right eye, and three-quarters blind in her left eye. Collier’s hometown is Ann Arbor, MI but she lives in Stanfordville, NY in order to train with Wes Dunham at Woodstock Stables in Millbrook, NY.

Collier represented the United States at the 2014 FEI World Equestrian Games in Caen, France and then went on to compete for the U.S. team at the 2016 Rio Paralympic Games, where she finished seventh individually riding Western Rose. In 2014, she won the Against All Odds award from the Fédération Equestre Internationale (FEI).

“I love Sydney’s positive attitude,” said Bloomberg. “She doesn’t see herself as having a disability or being restricted in any way. She just loves riding and wants to pursue her dreams. She’s one of the most positive and happy people I’ve met. She’s so enthusiastic about not just the horses, but also about riding for the USA. Every time you see her, she’s in head-to-toe USA gear, and she’s one of those people who is such a great representative of the U.S. both on and off the horse.”

Collier and Dunham found All in One, or “Alle,” through Kai Handt, who saw the horse in Germany. “He sent a video and we were just mesmerized by his walk, which is what you really look for,” said Collier. “You want a walk that draws you in and makes you want to watch the entire test. They’re really like unicorns to find. Our jaws just dropped. Kai was amazing and helped us to get him over here for me to try him.”

All in One is a 10-year-old (Abanos—Dauphina) with experience to fourth level. Collier made her showing debut with him at the Fall Breed & Dressage Show at Maplewood Warmbloods II & III in Middletown, NY on July 26-28. She plans to show a few more times throughout the summer to prepare for the Tryon Fall Dressage CPEDI3* and US Equestrian Para-Equestrian Dressage National Championships on September 12 through 15 in North Carolina. She aims to begin 2020 by competing in CPEDIs at the Adequan Global Dressage Festival in Wellington, FL aiming for Paralympic team selection.

“From the first ride, Alle and I just really clicked,” Collier said. “He has the uphill build that I’ve been searching for my entire riding career. The walk has its own metronome and tempo that is really helpful to my body. He tunes out things that my body unintentionally does, like with my left side not being able to work properly with my right side. This partnership has melded together really quickly and well so far. He’s been such a joy to work with. The other awesome thing is that on the ground, he’s like a big teddy bear. He leans into you and wants all of the cuddles. He’s such a sweetheart and really takes care of me in the saddle. The best part about him being such a great walk horse, is that he really enjoys the walk, which is so hard to find.”