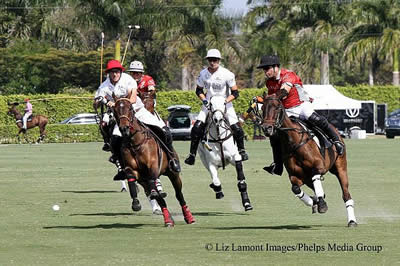 FlexJet’s players swarmed into the second chukker like escapees from a beehive that had just broken open, sending Palm Beach Illustrated scattering. FlexJet scored four rapid-fire goals, the first of which came on a penalty shot in the opening moments of the chukker. It was followed by a slick handoff from Rodrigo Andrade to Cody Ellis, who flipped the ball in on a belly shot so fast that had you blinked, you’d have sworn Andrade made the goal.

Palm Beach Illustrated seemed to start mimicking its opponent’s successful swarm technique, spreading out and then pairing up to pester the heck out of any FlexJet player who had possession of the ball. For a time the strategy was successful. Michel Dorignac briefly tied the game for Palm Beach Illustrated at 3-all, but a 72-yard slammer by Melissa Ganzi and a tight cutshot by Ellis added two more points to FlexJet’s side of the scoreboard.

Obregon responded by stealing the ball and making it his own all the way to goal. Tommy Collingwood herded a determined Andrade, keeping him completely out of the play so Obregon could score. The first half ended with FlexJet leading 8-6.

The most jaw-dropping defensive play of the game (and there were plenty of them) came in the fifth chukker. Dorignac pulled out ahead all by himself, stampeding downfield until he was just in front of the goal mouth. He wound up, and it looked like a sure goal – until Astrada decided to put the pressure on. He pulled out of the pack and charged in is direction. That apparently startled Dorignac, causing him to look up for a split second as he was taking the shot. It went wide. A penalty shot by Obregon then tied the game at 10-10, but FlexJet retook the lead and never let go for a 13-11 win.

FlexJet’s game was decidedly stronger than it was earlier in the tournament, when it lost to Valiente. In the match against Palm Beach Illustrated, all four FlexJet members scored, starting with Ellis. He turned out to be a stealth force, making FlexJet’s first goal of the match and following up with four more. Rated at 2 goals, Ellis provided an unanticipated boost to the scoring streak by Astrada, who put six points on the board. FlexJet’s Andrade and Ganzi each scored once.

The match was Ellis’s highest-scoring game to date in 20-goal tournament play. As player after player made a pilgrimage to the FlexJet tent to congratulate him after the game, Ellis was humble about his performance but couldn’t mask his excitement.

“It was fun! I got some ball, got to run a little bit,” he said. He attributed his goal-making to his recent opportunity to train with 9-goalers Andrade and Astrada. “It has been a great learning experience. I think I’m just getting to know them better and know the horses better and getting used to the speed.”

Astrada called it a tough game, adding that Palm Beach Illustrated is a very balanced team. “The four of them are good players, and they play well together. We had patience and we scored important goals. That’s what made the difference.”

The Ylvisaker Cup continues Thursday as two high-octane teams – Engima and Audi – battle it out at noon at IPC.