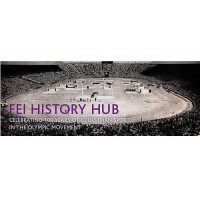 Lausanne (SUI), 2 July 2012 – In the final countdown to the London 2012 Olympic Games, the FEI has launched a new online hub fei.org/olympic dedicated to all things Olympic and Paralympic, both old and new.

In celebration of the centenary of equestrian sport in the Olympic Movement and all the equine and human athletes that have made Olympic equestrian history since 1912, a new section history.fei.org explores in detail each edition of the Games, with summaries on the sport, complete results, statistics and iconic photos of Olympic venues and the equestrian world’s most celebrated riders and horses. The richly illustrated website follows the evolution of a traditional activity open only to commissioned officers and “gentlemen riders” into the modern and exciting sport we know today. Amateur historians will be delighted to discover rare images and to enjoy little known facts and anecdotes.

The Olympic hub also includes all the technical information around the Olympic Games, links to schedules and results, as well as all the Olympic news from the FEI and a regularly updated photo gallery.

“Each Olympics and Paralympics bring new achievements and the ever changing horizon of sporting enterprise, and we greet each new experience with anticipation and expectation,” FEI President HRH Princess Haya said. “But the Games are not only about the here and now and what is to come. They are also about what has been achieved; what limitations have been exceeded, and what barriers broken; what records have been set and what heights of endeavour scaled.

“In the coming weeks, millions of people will have the chance to see equestrian sport at its very best at the Olympic and Paralympic Games. To all our athletes and support personnel taking part in the Olympic and Paralympic Games, I wish the very best of luck. We are all aware of the years of hard work that were necessary to take you to the top of our sport and we are immensely proud of you.”

The hub will soon be expanded to include biographies for athletes and officials at the London 2012 Olympic Games, as well as the history of equestrian events at the Paralympic Games since equestrian joined the list of Paralympic sports in 1996.