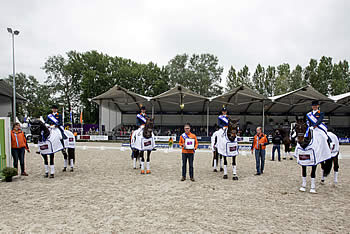 Rotterdam (NED), 19 June 2014 – Dutch riders had it all their own way when coming out on top by a significant margin at the third round of the FEI Nations Cup™ Dressage 2014 pilot series on home ground in Rotterdam (NED) today. This leg attracted teams from seven nations, with many fielding developing sides, but The Netherlands’ Chef d’Equipe, Wim Ernes, sent out the foursome that may possibly represent their country at the Alltech FEI World Equestrian Games™ in Normandy, France later in the summer and they left the rest trailing in their wake when clinching a decisive victory.

Underlining their absolute domination, the Dutch also filled the four top individual placings at the end of the competition, and the hugely popular partnership of Adelinde Cornelissen and Jerich Parzival marked their long-awaited return to the top end of the sport when producing the biggest score of the day. “I’m very happy,” said Cornelissen afterwards. “For the last few months I’ve been trying to change our technique, and it takes time… but I feel it’s coming together at last and we are on our way!” she added.

Denmark finished second, almost a full ten points behind, but the remaining teams were more closely bunched together, Sweden filling third place ahead of Great Britain in fourth, Belgium in fifth, France in sixth and the USA in seventh and last place.

Ernes made no secret of the fact that his riders would be closely observed in Rotterdam with a view to selection for Normandy, and they certainly impressed. Hans Peter Minderhoud led the way for his side this morning with the 12-year-old stallion Glock’s Johnson and posted 76.680 to get them off to a strong start.

However, that would prove the discard when the top three scores per team were taken into account in the final analysis.

Next to go for the host nation was Danielle Heijkoop with Kingsley Siro, and the talented 27-year-old and her 15-year-old stallion showed exactly why they have become top-team material over the last 12 months when bettering Minderhoud’s mark by 0.28 percentage points. Then Cornelissen and Parzival took their turn, putting the result beyond doubt even before the final Dutch duo entered the arena.

For Cornelissen right now it’s all about change. “For the last few months I’ve been trying to change our technique, but it takes time. I’m trying to apply some new stuff,” she explained after putting a very satisfactory mark of 81.480 on the board for her efforts.

She didn’t compete with Parzival over the winter months, preferring instead to concentrate on training.

“We came back out at Arnhem (NED) two weeks ago and there were too many mistakes. Communications-wise it’s all a bit different and in competition we fall back into our old routine, there were miscommunications and I knew we had to solve that, but it is a week already since then and I feel it’s coming together at last and we are on our way!” she explained.

Prior to that outing in Arnhem the pair had not competed for nine months. “The last time we were out was in Vienna (AUT) last September and since then we have just been training and training. I wanted to change some stuff and if you do competitions it’s not possible. I didn’t want to do both the World Cup and the World Championships – it’s just too much – and you have to be in top shape so I decided to leave out the World Cup this time and put my concentration on the Games,” said the rider who, with the now 17-year-old chestnut gelding, has accumulated European and Olympic medals along with a double of Reem Acra FEI World Cup™ Dressage series titles.

Last year Parzival was diagnosed with a heart arrhythmia but bounced back after surgery and today Cornelissen said, “He feels great, and in the paddock he behaves more like a 7-year-old than 17!”

Last to go for the Dutch was Edward Gal with the 13-year-old stallion Glock’s Undercover who posted 80.780 to underpin a great day for the host nation.

The Danish team finished second despite having no drop score as they, like the Americans, had only three team-members. Mikala Munter Gundersen provided the best Danish result with a mark of 71.800 for My Lady which slotted them into sixth place, but it was Sweden’s Minna Telde and Santana who came closest to the Dutch contingent when posting 73.040 to line up fifth individually.

The 2013 pilot series champions from The Netherlands have now forged well ahead on the FEI Nations Cup™ Dressage 2014 leaderboard. Winners at the second leg in Vidauban, France in February, they carry 30 points into the fourth leg at Kristiansand in Norway next week, trailed by Sweden in second place carrying 18 points and the USA and Belgium tied in third spot with 15 points apiece. Two further legs remain after next week’s fixture, at Aachen (GER) and Hickstead (GBR) in July before the series concludes.

The host nation team from The Netherlands won by a significant margin of almost 10 percentage points over Denmark in second place while Sweden finished third.

The highest individual score of the competition was registered by the Dutch combination of Adelinde Cornelissen and Jerich Parzival who scored 81.480.

Already leading after the first two legs, the Dutch, winners in the inaugural 2013 pilot season, have now forged even further ahead on the league table following today’s result.

Denmark and the USA fielded just three team members while the remaining teams all consisted of four horse-and-rider combinations.

The six-leg FEI Nations Cup™ Dressage 2014 series will continue with Round 4 taking place at Kristiansand in Norway on Thursday 26 June.

Adelinde Cornelissen (NED) – “Next we will do Aachen and then the Dutch Championships before the WEG.”

Danielle Heijkoop (NED) – “I only scored higher (in Grand Prix) once before, at Dortumund in March. This time the score was a little lower but I had a very good feeling. He (Kingsley Siro) was good in front and in his neck and he did good work in piaffe and passage but the pirouette was a bit too small so we were a little unbalanced. That could have been better.”