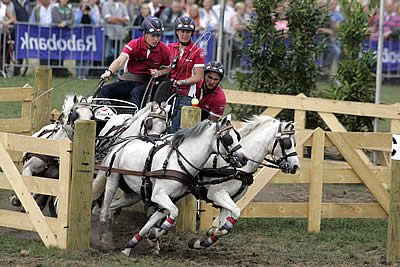 Bram Chardon (NED) on his way to victory in the four-in-hand category of the FEI World Pony Driving Championships 2011. © Rinaldo de Craen/FEI.

Lausanne (SUI), 30 October 2013 – From 31 October to 3 November, the Pony Driving world will gather at Pau in the French Pyrenees for the sixth edition of the FEI World Driving Championships for Combined Ponies. Individual titleholders Kristina Klindt (DEN) in the single pony category, Dieter Baackmann (GER), pair pony, and Bram Chardon (NED), four-in-hand, will be in Pau to defend their gold medals. Team champion Germany has once again fielded a strong squad.

No less than 70 drivers from 16 nations will take part in the championships; 29 competitors are entered in the single pony class, 22 in the pony pairs, and 19 in the four-in-hand category. Teams consisting of one or two athletes in each class and representing 12 countries will be battling it out for the nations honours. The team classification will be determined by adding the best team competitors’ final combined scores. Only those scores of the team members who have completed all three competitions without elimination can be counted towards the final team scores.

The world championships will be organised as part of Les Etoiles de Pau on the site where the first leg of the FEI Classics 2013/2014 was held last weekend. The dressage and cones competitions will take place in the recently refurbished all-weather main arena where two out of the eight marathon obstacles will also be placed. The remaining six obstacles, including two beautiful water fences, were built on the cross country course used for Eventing.

This year the Organising Committee introduced an original initiative whereby each competing country was asked to make a creative contribution to the nations obstacle design. Instead of placing flowers on that fence, the organisers decided to offer each nation the opportunity to decorate its cube with an element representing their country. A special prize will be awarded to the nation whose decoration is judged the best.

The world championships begins on Wednesday, 30 October, with the horse inspection. The dressage competition will follow on Thursday, 31 October and Friday, 1 November. The marathon will take place on Saturday, 2 November. The design of the marathon obstacles is in the capable and experienced hands of international O-course designer Christian Iseli (SUI), who was also responsible for the course at the previous FEI World Pony Championships in Lipica (SLO) in 2011. The final obstacle driving competition and medal ceremony are scheduled for Sunday, 3 November.