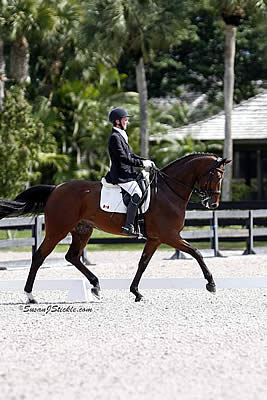 Wellington, FL – February 4, 2014 – Diane Creech and Diana C showed their hard work at home is paying off as they put in another standout performance in competition. The pair earned a score of 72.838 percent to take first place in Fourth Level Test 2 on Saturday at the Adequan Global Dressage Festival 4 National show, held at The Stadium at PBIEC in Wellington, FL.

Creech and Diana C scored in the high 60s in their first show of the season on Jan. 21, and the experience paid off with the impressive results in their second outing.  Diana C, a 7-year-old Hanoverian mare (Damsey-Belinda, Brentano II), is owned by Leatherdale Farms.

“Mr. and Mrs. Leatherdale and I could not be any happier with Diana C,” Creech said. “She is getting such great experience and mileage in the show ring.”

Creech has been working with Lars Petersen while in Florida and said Diana C has benefited from the additional guidance.

“Thanks to Lars Petersen, we’ve been getting super training at home,” she said. “Lars is not only great with the more advanced horses, but also with the young, up-and-coming ones. He knows how to develop them from the basic to Grand Prix, and that is what makes him such a great trainer.”

Creech is excited about the potential of the promising young mare and looks forward to seeing what her future holds.

“Mr. and Mrs. Leatherdale are very much enjoying watching Diana C coming more and more into herself,” she said. “We all agree that she is a very special lady!”

Next up for Creech and the Leatherdale Farms horses will be the Adequan Global Dressage Festival 5 CDI4* and National show Feb. 6-9. Creech said Devon L has been training well and will be ready to go for the Grand Prix and Grand Prix Freestyle at the CDI4*, while Chrevis Christo will come out for the Intermediaire II at the National show.