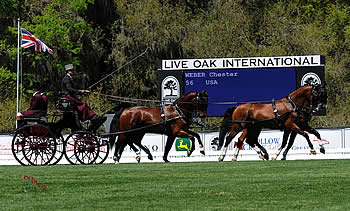 Chester Weber and his team during the Yellowframe Farm FEI Driven Dressage. (Photo courtesy of PicsofYou.com)

Ocala, FL (March 20, 2013) – The 2014 Live Oak International is underway, bringing the best competitors in show jumping and combined driving to Live Oak Plantation in Ocala, Florida.  The prestigious competition, considered the premier combined driving event in North America, was favored with flawless weather and a strong showing of appreciative spectators as the equestrian extravaganza began.

Wednesday opened with FEI Horse Inspections for the Combined Driving Event (CDE) whose modern roots trace to 1968 when Britain’s Prince Philip, then-president of the Federation Equestre Internationale (FEI), initiated the formulation of international rules for a sport performed by countless generations around the world.

The first phase of the CAI Live Oak International kicked off Thursday morning at 9am with the FEI driven dressage (from the French word, ‘to train’) that tested each driver and team with a prescribed sequence of movements, driven from memory, and executed within the parameters of lettered markers around the arena.

“Today was great sport and I have high hopes for the rest of the weekend,” said Chester Weber.  Facing a roster of challengers from the United States and Canada, defending Four-in-Hand champion Weber is seeded first (78.1%) in the FEI Four-in-Hand Horse USEF National Championship sponsored by Ariat with a better than 10-point lead ahead of closest contender and last year’s Pair Horse champion at Live Oak, Misdee Wrigley-Miller (67.5%). Proving once again why his crisp presentation and accuracy have earned Weber the nickname, Mr. Dressage, judges Skar, Turbe, Counsell, Nicoli and Christ all scored him handily (35.02 points) for this first of three deciding phases.

USA driver Suzy Stafford leads in the FEI Single Horse division, with a 74.3% top score ahead of closest contender, Leslie Berndl’s (USA) 71.9%.  Stafford trained for a career as a dressage and combined training instructor before a leg injury ended her riding career but became a boon to American combined driving.  In 2001, she began working with seven-time US National Pair Driving champion Lisa Singer and has since become one of the most respected lady whips in the world, as well as a top contender for Live Oak’s Single Horse driving crown.

During the lunch break, the Budweiser Clydesdales put on an impressive display with their six-in-hand, a remarkable spectacle that will be repeated on Saturday before the $50,000 Live Oak International CSI**-W Grand Prix.  Ten-time National Four-in-Hand champion, Chester Weber, who is hosting the equestrian extravaganza at his family’s Live Oak Plantation, was first introduced to driving taking the reins of Clydesdale horses.

USA drivers currently seeded first include Tracey Morgan, who leads (70.5%) the FEI Single Pony sponsored by Hillcroft Farm; Boots Wright leads in Intermediate Pair Pony (74.3%). Wiebe Dragstra is at the top in the Intermediate Pair Horse (73.3%), as is Steve Wilson and his Lipizzaners in the FEI Pair Horse (67.6%).

Germany’s Carola Slater-Diener closes the first day of competition as its highest-placed international entry, leading (64.7%) the FEI Pair Pony, sponsored by Hillcroft Farm, ahead of US driver Jennifer Matheson (64%).

As glorious as any competing team was the special lunchtime appearance of the stars of the Super Bowl TV commercials:  the Budweiser Clydesdales.  More than 16 tons of groomed horses and gleaming tack, hitched to a vintage Studebaker beer wagon, drew waves of fans of all ages as they effortlessly figure-eighted their way around the arena.

Thursday will open with the FEI Horse Inspection for show jumping horses and the Driving Marathon Course Inspection, followed by the Competitor’s Welcome event at 6pm.

Admission is $10 at the gate for adults and $5 for seniors and children under 12. It is strongly recommended that spectators bring lawn chairs. Concessions and a Vendor Village will be open during the entire competition. Tailgating is available for the Driving Marathon Saturday. To reserve a tailgating space contact 352-207-3615.

For more information on Live Oak International, including a full schedule of events, visit their website at www.liveoakinternational.com. Listen to live radio broadcasts on Friday morning, 9:30-11 a.m. on WOCA 96.3FM/1370AM and Saturday morning, 8-9 a.m. on NBC Sports Radio 100.1FM/900AM.