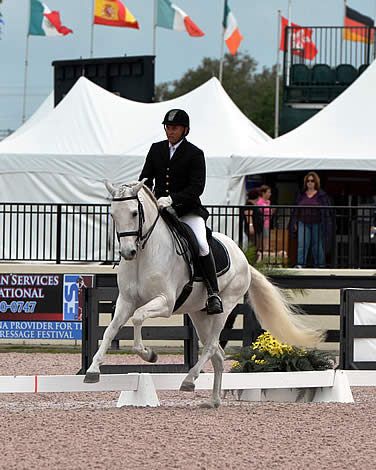 Wellington, FL (May 6, 2013) – Two talented Lusitanos represented the breed and brought the flair of the Portuguese to the dressage arena during the 2013 Adequan Global Dressage Festival, where the top dressage horses in the nation compete during the winter season.  Balder, ridden by owner Lesley Maxwell, and Versatil Imagem, ridden by Matt McLaughlin, were awarded the High Score Lusitano Award for performances at the GDF 5* CDI and WEF Dressage Classic CDI-3*.

Patience and training paid off for dressage trainer Matt McLaughlin, who rode his 11-year-old Lusitano gelding, Versatil Imagem, to a score a 63% in USEF Fourth Level test during the Adequan Global Dressage Festival 5* show.  Versatil’s score topped all other Lusitanos at the show, and McLaughlin was very proud of his beautiful grey horse.  He explained that Versatil was pushed very hard as a youngster, before McLaughlin owned him, so being recognized with this award was quite special.  “I’ve been bringing him along,” he said, “and getting him over the pressure from bad experiences when he was younger has been a tough road.”  McLaughlin describes Versatil as a kind and affectionate horse, and feels his courageous Lusitano heart has brought him to the level he deserves to be in the show ring.  He goes on to say Versatil has fabulous FEI level dressage movement and competitive Grand Prix potential.

McLaughlin, who owns Equine Equities in St. Cloud, Florida, has successfully trained horses through Grand Prix dressage that have gone on to compete nationally and internationally.  He has earned the USDF Bronze, Silver and Gold rider medals, and in addition to providing instruction at his Florida farm, he travels throughout North America and Europe as a clinician.  He also has extensive history in the equine entertainment industry and is a charismatic and exciting performer. This was his first time showing at the Adequan Global Dressage Festival 5*, and winning the Interagro Lusitano High Score Award made the show an even greater victory.

Lesley Maxwell and her gray Lusitano Balder were also in the win, topping the field of Lusitanos during the WEF Dressage Classic CDI-3*.  The pair rode their way to a score of 63.710% in the First Level Test 3. Maxwell said she was so excited to win the Lusitano High Score and have Balder recognized at the Global Dressage Festival.  She will now have a reminder of this sweet victory every time she takes him out of his stall with the beautifully engraved leather halter she won as a part of the award.

Maxwell rides and trains with Melanie Cerny, who trains with Shannon Dueck.  They are based out of Loxahatchee, Florida.  Everyone involved with Balder and his training are impressed by him and the Lusitano breed.  Maxwell acknowledges that the Lusitano horse is, in general, built for collection, and this coupled with their rideability and trainability make them a near perfect dressage horse.  The scores that she and Balder are getting this season, along with the many other Lusitanos competing in the Florida shows, give strong credence to the breed’s talent, trainability, and athleticism.  Interagro Lusitanos is dedicated to preserving these traits in the Lusitano, and horses bred by Interagro have progressed in and been successful at many disciplines, including Grand Prix dressage.

The Interagro horse is a modern Lusitano, a horse that excels in the traditional equestrian disciplines, from dressage and driving to jumping and working equitation. Interagro horses can be seen driving, working, and training on the farm in Brazil every day. Interagro is committed to preserving the pure bloodlines of the Lusitano breed, and Interagro bloodlines include some of the most respected bloodlines in the breed such as Farao (JHC), Nirvana Interagro, Ofensor (MV), Xique-Xique (CI) and Yacht (SA).

For more information on Destination Lusitano or to learn more about Interagro Lusitanos, visit their website at www.lusitano-interagro.com.

Founded in 1975 by Dr. Paulo Gavião Gonzaga to preserve the Lusitano breed, Interagro Lusitanos is now recognized as the world’s largest breeder and exporter of Lusitano horses. Dr. Gonzaga started with a small band of four mares and one stallion imported to Brazil from the breed’s native Portugal; to date over 600 horses populate the 1200-acre ranch outside São Paulo. Today, Cecilia Gonzaga manages the farm and operations. Interagro Lusitanos are handled, prepared, and evaluated from birth, with a handful of the best stock presented at auction each year.