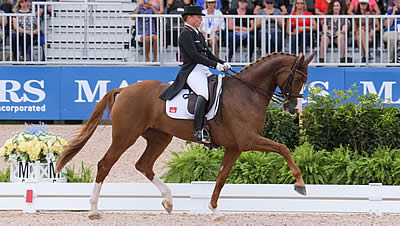 London, U.K. – Feb. 24, 2020 – Horse & Country (H&C) is proud to bring their subscribers an exclusive new series featuring German Grand Prix dressage legend and five-time Olympian Isabell Werth. The series, “A Masterclass with Isabell Werth,” will boast four half-hour educational episodes during which Werth will provide unique insight into her training philosophy and what has propelled her to the very top of equestrian sport.

Raised on her parents’ farm in Germany, Werth was exposed to horses from an early age. She competed in showjumping and eventing before being exposed to dressage by her neighbor, renowned dressage expert Dr. Uwe Schulten-Baumer, at age 17. Werth and her mentor worked together for 14 years before Werth established her own training facility near her home village of Rheinberg, Germany. Her career took off and now, with six Olympic gold medals and numerous world championship wins under her belt, Werth is the most decorated equestrian athlete of all time.

Even more impressively, Werth currently can be found three times in the top ten FEI World Dressage Ranking List as she holds the top spot with Bella Rose 2, second place with Weihegold OLD, and ninth place with Emilio 107.

“I love what I do. To go out into the stable and to go out and work with different horses and improve horses – in the end, it brings me great emotions. There is no question of motivation. I really enjoy being competitive,” says Werth of the sport.

Don’t miss the opportunity to watch and learn from the queen of dressage! The first three episodes are available on demand now for your viewing pleasure, while the final episode will be broadcast Feb. 26 at 3:00 p.m. EST.

Subscribe now to watch ‘A Masterclass with Isabell Werth’.