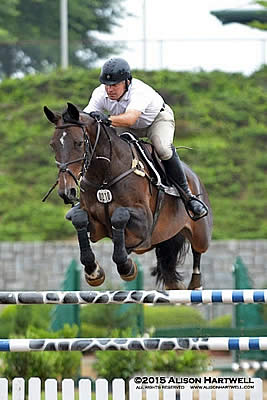 Vale pilots E.S. Finou 4 over an obstacle in the Olympic Arena in the Horseflight Open Welcome Thursday.

Aaron Vale of Williston, Florida and Thinks Like a Horse Farm started the opening week of the Atlanta Summer Classic on a winning streak after securing wins in both the $15,000 Horseflight Open Welcome and the $2,500 USHJA National Hunter Derby and won the Kastel Denmark Style of Hunter Riding Award.

Thursday’s $15,000 Horseflight Open Welcome saw 21 horse and rider teams compete for the cash in the Olympic Arena over a course designed by Manuel Esparza of Mexico City, Mexico. The first round time was set at 79 seconds and only six turned in clean first rounds.

Aaron Vale of Morriston, Florida and Sarah Turner’s Acolina R were second to go in the class and the first to go clean in a time of 70.307 seconds. Their second round effort in a time of 41.442 seconds was also clean and well within the time allowed of 57 seconds which put them in the lead. But with 19 to follow, it was still anyone’s class.

Michael Kocher of Tryon, North Carolina and Ri Arm Farm’s Fair Enough were the next pair to turn in a clean first round in a time of 73.824 seconds. Their second round effort resulted in four jump faults in a time of 46.896 and would see them finish in fifth place overall.

Mauricio Guevara of Bogota, Colombia and his own Capano Z were the next pair to go fault-free in their first round and second rounds in times of 76.044 and 45.960 seconds, respectively, which put them in contention for a ribbon.

Colleen Acosta from Roanoke, Texas and Anastasia Stewart’s Diamond were the next to turn in a clean first round in a time of 73.002 seconds. Eight jump faults in their second round in a time of 53.664 seconds, would see them finish in sixth place overall.

Forgiven, owned and ridden by Derek Petersen of Archer, Florida, was next to turn in double clear rounds in times of 69.798 and 39.434 seconds, respectively, which put them into the lead.

Equi-Sport LLC’s E.S. Finou 4, piloted by Vale, was the next and final pair to turn in double clean rounds in times of 69.301 and 39.050 seconds, respectively, taking the lead away from Petersen.

The class wrapped up with Vale and E.S. Finou 4 taking the win followed by Petersen and Forgiven in second. Vale returned for thirds with Sarah Turner’s Acolina R and fourth place went to Guevara and his own Capano Z. Kocher and Ri Arm Farm’s Fair Enough secured fifth place and Acosta and Anastasia Stewart’s Diamond took home the sixth place ribbon.

Seventh was awarded to Quidam’s Good Luck, owned by Troy Glaus and ridden by Vale, while eighth place was awarded to Haley Gassel of Lenoir City, Tennessee in the irons of Westwind Equine Training Center’s Quite Dark 2.

Vale continued his winning streak right into Friday when he captured the win in the $2,500 USHJA National Hunter Derby in the irons of Donald Stewart’s Dress Balou with a first and second round total score of 179.

VIP opens at 6:30 pm. Tables of 8 are $450 per week and a cash bar is available each week. Be sure to see the office and purchase your table now for the best views, meals and events at the Atlanta Summer Classic. For those on the run, feel free to call Grace at 843.786.5503 to reserve your table.